The main drawing card though is that the turbodiesel V6 will become the selected engine for the next Ranger Raptor. With details surrounding it having remained something of a mystery since initial claims broke last year, a slew of apparent new specifications have emerged of not only the all-new Ford Ranger, but also the Everest.

In accordance with the mentioned report from whichcar.com.au that the Ranger will become available with a V6 engine for the first time since 2006, Australia’s carexpert.com.au has obtained a confidential internal document that points to not only the bent-six, but also plug-in hybrid capability.

According to the online publication, the Ranger, which will ride on an evolution of the T6 platform shared with the next Volkswagen Amarok and carry the internal designation P703, will drop both the 2.2-litre four-cylinder and 3.2-litre five-cylinder engines, leaving the 157kW/500Nm 2.0-litre bi-turbodiesel as the entry-level engine.

Positioned above it will be a 3.0-litre V6 turbodiesel that punches out 186kW/597Nm, exactly the same outputs and more than likely the same oil-burner that powers the F-150 in North America. The final powerunit will be the mentioned plug-in hybrid that will see the 2.3 EcoBoost petrol used in the current North American Ranger pair-up with an electric motor for a total system output of 270kW/680Nm.

The main drawing card though is that the turbodiesel V6 will become the selected engine for the next Ranger Raptor with the entire line-up set to be offered exclusively with the General Motors co-developed ten-speed automatic gearbox.

Select details of the Ranger’s interior has also emerged with carexpert alleging that pride of place will go to a brand-new tablet-style 12.8-inch touchscreen infotainment system with not only Apple CarPlay and Android Auto, but also Ford’s new SYNC 4 software. A 10.25-inch digital instrument cluster will also feature. 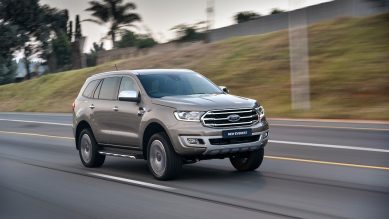 At the other end of the scale, the Everest, which prior reports have said will take styling from the Explorer and possibly switch to a unibody platform, will be offered in no less than six trim levels with the same assortment of engines.

The range will kick-off with the Ambiente equipped with the twin-blown oil-burner, followed by the Trend, Trend Sport and Wildtrak X. While the latter pair will have the V6 turbodiesel as standard along with four-wheel-drive, the plug-in hybrid will be optional on all of these grades with five seats being standard and seven a cost option.  The former pair will however come with the choice of two-or-four-wheel-drive.

At the range’s sharp-end are the Titanium and Platinum which will have the seven-seat option and four-wheel-drive as standard, but while the turbodiesel will remain the de facto engine for the former, the latter’s default will be the plug-in hybrid with the oil-burner relegated to the options list. A so-called Extreme Off-Road Package will be available from the Trend Sport and up featuring BF Goodrich all-terrain tyres, Bilstein shocks and rock sliders.

Although it was reported that Ford could unveil the Ranger next year, it now seems more likely that 2022 will be opted for, a year in which Volkswagen will also unveil the new Amarok teased back in March.

The Everest meanwhile, which has already been spotted undergoing testing, is set to follow soon after but what remains unknown is whether it will spawn a Volkswagen offshoot as alluded to by a render published last week by indianautosblog.com. Despite the early nature of the claims, expect more to emerge in the coming months leading up to the Ranger’s planned reveal.