Nivus will only have a single drivetrain option, a flex-fuel 1.4 TSI badged 200 TSI. After an extensive teaser campaign and revealing of select details of the interior, Volkswagen officially unveiled the new Polo-based Nivus crossover in Brazil on Thursday evening (28 May).

A South American exclusive model for now, the MQB A0 underpinned Nivus boasts a coupe-style look similar to the North American Atlas Cross Sport, with the front-end being similar to not only that of the T-Cross, but also the US-spec Passat and Jetta in the design of the grille and headlights.

Measuring 4 266 mm in overall length with a wheelbase of 2 566 mm, height of 1 493 mm and width of 1 757 mm, the Nivus is longer in the case of the former than both its siblings,  with Volkswagen claiming a boot capacity of 415-litres with the rear seats up. 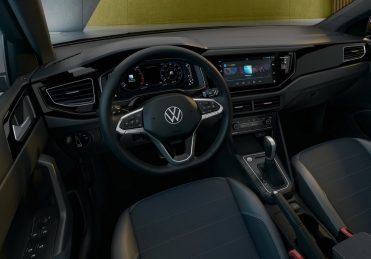 As reported earlier, the Nivus will only have a single drivetrain option, a flex-fuel 1.4 TSI badged 200 TSI that makes reference to the torque figure of 200 Nm when fuelled by ethanol. Output is rated at 94 kW with a six-speed Tiptronic being the sole transmission offered. A configuration also used on the Virtus sedan, the amount of twist is delivered to the front wheels only with no chance Volkswagen’s 4Motion system being offered anytime soon.

In Brazil, where the Nivus will be launched next month before going on sale in Europe next year, a choice of three trim grades are offered; base, Comfortline and Highline with pricing from R $79 990 (R258 134). It will be built at the São Bernardo do Campo Plant in São Paulo with the chances of it coming to South Africa being unlikely.