Underneath the bonnet, two turbodiesel engines shared with the Trafic are offered. Revived two months ago after a seven-year absence, Mitsubishi Australia has revealed exact price and spec details of its reborn Express panel van.

Essentially a restyled Renault Trafic built in the same Sandouville factory near the city of Le Havre, the Express returns Down Under as either a short-or-long-wheelbase model measuring 4 999 mm overall with the latter coming in at 5 399 mm. Claimed load volume is 5.2 cubic metres for the former and six cubic metres for the latter.

Touted as being more of a workhorse, and therefore cheaper than its sibling, the Express is only offered in one trim regardless of bodystyle, the GLX, with notable standard equipment consisting of 16-inch steel wheels, dual sliding doors, electric windows, cruise control, height adjustability for the driver’s seat, heated electric mirrors, a central armrest when the third seat is not in use, fabric trimmed seats and twin rear barn-style doors. 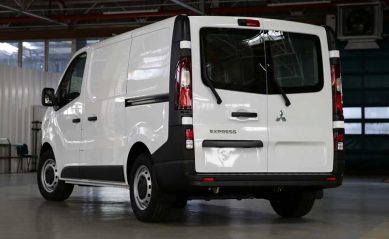 Unlike the Trafic, the Express does without a touchscreen infotainment and instead comes with a conventional audio that still features Bluetooth and USB. A smartphone mount is however provided just above the left-hand-side air vent with a storage slot positioned above the radio.

Underneath the bonnet, two turbodiesel engines shared with the Trafic are offered; a twin-turbo 1.6 that makes 103kW/340Nm and a single blower 2.0-litre that delivers 125kW/380Nm. A six-speed manual gearbox is standard on the former with the latter getting not only a six-speed dual-clutch as standard, but also auto on/off headlights, rain sense wipers and an auto-dimming rear-view mirror that doubles up as the display for the reverse camera. 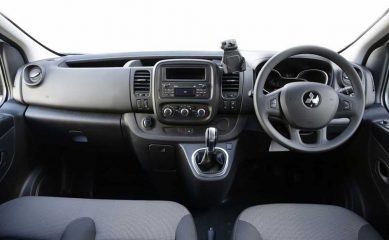 Classified as an Australasian market only model for now, the Express can be had in a choice of four colours; Platinum Grey, white, black and red with delivers commencing next month. As mentioned, it is not expect to make the trek to South Africa soon.