Despite being billed as a facelift, the Santa Fe is brand new underneath in that it rides on Hyundai’s latest “third vehicle” platform. Having only debuted in a single teaser image last month, Hyundai officially revealed the heavily updated Santa Fe unexpectedly in the early hours of this morning (3 June).

The surprise recipient of a mid-life update seeing as the current fourth generation only premiered two years ago, the front facia sports elements of not only the new Sonata and Elantra, but also the Kona and from some angles, the Palisade.

The mentioned updates include a wider jewelled Cascading grille, a reshaped lower air intake and skidplate at the base of the equally new front bumper, which also features vertical air inlets on the flanks, up to 20-inch alloy wheels and a new design for the split headlights in the shape of a T graphic. 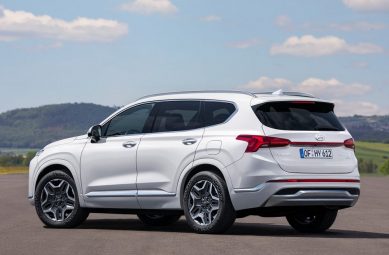 Compared to the front, the changes at the rear are less prominent where key differences include a new bumper and reshaped taillight cluster connected by a central reflector running across the length of the tailgate. A further new addition is the so-called Luxury pack including not only the 20-inch alloys, but also body coloured side cladding and a black finish for the lower half of the bumpers.

Inside, the Palisade influence is most prominent in the design of the now button heavy centre console, which eschews a gear lever in favour of a button arrangement.  Replacing the previous eight-inch infotainment system is a 10.25-inch display, with further changes being a new 12.3-inch digital instrument cluster and the Terrain Mode dial for the all-wheel-drive system that features six modes; Eco, Comfort, Smart, Sand, Snow/Mud and Sport.

Despite being billed as a facelift, the Santa Fe is brand new underneath in that it rides on Hyundai’s latest “third vehicle” platform, which is said to offer “significant improvements in performance, handling, fuel efficiency and safety” over the architecture used by its pre-facelift predecessor. 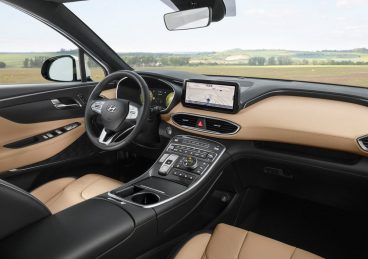 Somewhat surprisingly, no details regarding safety systems were announced, the same being true of the likely updated powerunits with Hyundai merely stating that the Santa Fe will receive its latest generation Smartstream hybrid and plug-in hybrid units. Expect however conventional petrol and diesel engines to feature, likely shared with the new Kia Sorento.

In Europe, sales of the Santa Fe starts in September but before then, expect details regarding the mentioned powerunits to be revealed.