Underneath the bonnet, the T-Roc is an all TSI affair After a wait of nearly three years, with local availability having been confirmed last year, Volkswagen has ow officially divulged specification details of the new T-Roc.

Positioned between the T-Cross and Tiguan, the coupe-styled T-Roc rides on the same MQB platform as the latter and the previous generation Golf, and measures 80 mm longer in overall length than the T-Cross, but 162 mm shorter than the conventional five-seat Tiguan. Claimed luggage space is 445-litres with the rear seats up and 1 290-litres with the 60/40 split folded down. 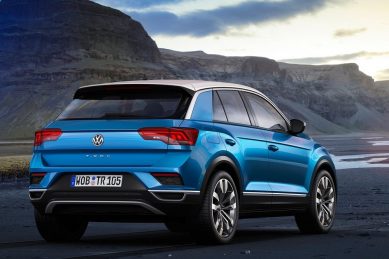 From the options list, buyers can have a panoramic sunroof, the 9.2-inch Discover Pro infotainment system with integrated satellite navigation and wireless App Connect, a six-speaker Beats sound system and an electronic trailer hitch. Although standard on the R-Line, the 11.7-inch Active Info Display digital instrument cluster is optional on the Design.

Underneath the bonnet, the T-Roc is an all TSI affair with the Design retaining the tried-and-tested 1.4-litre engine instead of the 1.5 TSI Evo offered in Europe, with outputs of 110kW/250Nm. An eight-speed Tiptronic ‘box is the only transmission offered with Volkswagen claiming a top speed of 205 km/h and 0-100 km/h in 8.4 seconds. Fuel consumption is rated at 6.9 L/100 km. Optional on the Design but standard on the R-Line, the stalwart 2.0 TSI delivers 140kW/320Nm, but is paired to a seven-speed DSG with drive going to all four wheels via Volkswagen’s 4Motion system. Top speed is 216 km/h with the 0-100 km/h dash over in 7.2 seconds. Wolfsburg’s claimed consumption is 8.3 L/100 km.

Coming as standard with a three year/120 000km warranty plus a five year/ 90 000km service plan, the T-Roc will initially be limited to the entry-level Design and flagship R-Line with the mid-range Design only arriving in January next year. Final pricing will be announced in August with projected stickers of R500 000 for the 1.4 TSI Design and R600 000 for the 2.0 TSI R-Line.