Despite being front-wheel-drive, an all-wheel-drive option can be specified as an option. Dropped from South Africa some six years ago, not long after a subtle mid-life update, Kia has stuck with the Optima as its flagship sedan in a number of markets, until earlier this year when the designation was phased-out in favour of the K5 moniker used in South Korea.

Now, less than a year after making its debut, the fifth generation model has been detailed in North American-spec where it will compete against the likes of its Hyundai Sonata sibling, the Volvo S60, Honda Accord, Mazda6, the segment-leading Toyota Camry, Nissan Altima, Dodge Charger and the soon-to-be discontinued Ford Fusion. 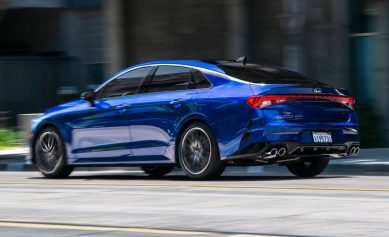 Boasting a distinctive coupe-like look with a fastback rear-end, the K5 rides on the same NU3 platform as the Sonata and will go on sale in the States with a choice of four trim levels; LX, LX-S, sporty GT-Line (grey) and EX with the range-topping GT (blue) following later this year. Measuring 4 905 mm in overall length with a wheelbase of 2 850 mm, height of 1 445 mm and width of 1 859 mm, the K5 is both longer and wider than the Optima, but slightly lower with Kia nonetheless claiming improvements in interior space.

Features, depending on the trim level, includes an eight or 10.25-inch touchscreen infotainment system with Apple CarPlay, Android Auto and satellite navigation, wireless smartphone charger, Remote Engine Start, a panoramic sunroof, a flat-bottom steering wheel on the GT-Line and GT, an acoustic laminated windscreen and a four mode drive selector; Smart, Normal, Sport and Custom with the GT receiving a Sport+ setting. 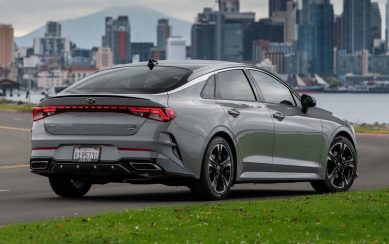 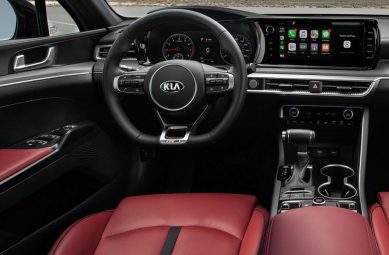