Guaranteed to rate as one of its most dramatic models ever made, Lamborghini has taken the roof off of the already striking hybrid Sián in creating the Sián Roadster.

Officially the most powerful drop-top Sant’Agata has ever made, the Roadster utilises the same 48-volt mild-hybrid system as the coupe that produces 25 kW, which, when combined with the 577 kW normally aspirated 6.5-litre V12, delivers a combined 602 kW. Paired to a seven-speed Independent Shift Rod (ISR) transmission, the Roadster will dispatch the benchmark 0-100 km/h sprint in a mere 2.9 seconds, a tenth slower than the coupe, and reach a top speed of “over 350 km/h”. 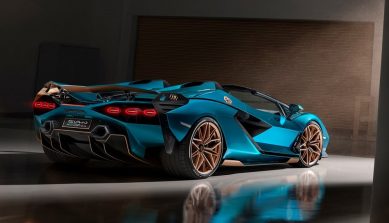 Like the hard-top, the Roadster’s electric motor not only results in the presence of a regenerative braking system, but also a boost function at speeds up to 130 km/h Lamborghini claims aids low-speed manoeuvres without there being any delay. Weighing 34 kg, the motor is mounted inside the gearbox, a move the Raging Bull claims “provides immediate response and improved performance”.

Aside from the soft-top roof, the Roadster’s exterior differences from its sibling are minor with the Countach inspired periscopio taillights being retained along with the double front splitter and side active cooling vents. 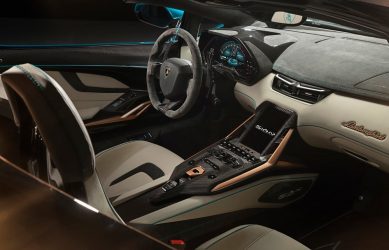 It does however come with a new active rear wing and debuts in a colour dubbed Blu Uranus with Oro Electrum detailing on the splitter, side skirts and on the wheels. The work of Lamborghini’s Centro Stille division and available from its Ad Personam customisation catalogue, the combination is claimed to represent “freedom and driving elation” as well as “signifying electrification”.

Like the coupe, the Sián Roadster will have a limited production run of only 19 units, of which all have been accounted for despite the price being unknown.