A model that has been flying beneath the radar since its world debut three years ago, Audi has sprung an unexpected surprise in the shape of a new flagship diesel version of the A8 in Germany.

In a strange twist though, the publication reveals that the model has been available for pre-ordering since 12 December last year, but never officially launched with the regular models or on its own accord as no images detailing it were provided. Its debut on the marque’s online configurator though has provided exact technical details of the most powerful, non-sporting A8 model on sale today. 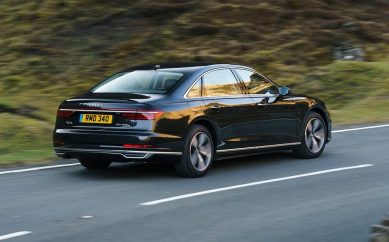 Using the same twin-turbodiesel 4.0-litre V8 engine as the SQ7 and Volkswagen Touareg V8 TDI, the mild-hybrid unit produces 320kW/900Nm and results in a limited top speed of 250 km/h and 0-100 km/h in 4.4 seconds. Claimed fuel consumption is 8.7 L/100 km with the amount of grunt going to all four wheels via an eight-speed Tiptronic gearbox.

Attributing the mystery surrounding the model’s absence from the pricing list to the rise in popularity of the Audi’s e-tron models, the publication alleges that the engine’s affiliation with the now infamous dieselgate emissions saga rates another possible reason, this despite being cleared and also used to significant acclaim, in the SQ8. Slotting in below the 420kW/800Nm S8, the 60 TDI retails from €115 171 (R2 198 139).

Aside from the 60 TDI, Ingolstadt, earlier this month, revealed the new 60 L TFSI e, a model also mentioned in the original launch literature three years ago, but only made available now without the need for pre-ordering. Despite using the same V6 engine as the 55 TFSI, the inclusion of a 14.1 kWh lithium-ion battery pack means a combined output of 330kW/700Nm, an all-electric range of 46 km/h and emissions free driving at up to 135 km/h. Top speed is again limited to 250 km/h with 0-100 km/h taking 4.9 seconds. Like the TDI, the TFSI e comes with quattro all-wheel-drive and eight-speed Tiptronic ‘box, but as indicated by the ‘L’ nomenclature, is only offered in long wheelbase bodystyle. In this guise, the overall length of the MLB Evo platform increases by 130 mm to 5 302 mm, the wheelbase from 2 998 mm to 3 128 mm and the height from 1 473 mm to 1 488 mm. The overall width remains unchanged at 1 945 mm.

Although Audi did confirm the A8 for South Africa back in 2018, its suspicious absence from the 2020/2021 product portfolio line-up released last month has seemingly proved otherwise.