BMW has revealed its rival for the Mercedes-Benz EQC and incoming Audi Q4 e-tron in the shape of the iX3 that will go on sale in select international markets from early next year.

The first in a slew of all-electric models set to be churned out by the blue-and-white roundel, the iX3 forms part of Munich’s NEXT strategy aimed at introducing 25 electrified models by 2023, which will include offerings such as the 4 Series derived i4 and the i7 based on the next generation 7 Series.

Differing little externally from the standard X3, the exception being the sealed kidney grille, blue accents and aerodynamically optimised 19-inch light alloy wheels, the iX3 sits 75 mm closer to the ground than its diesel or petrol powered sibling, and has a claimed drag coefficient of 0.29. 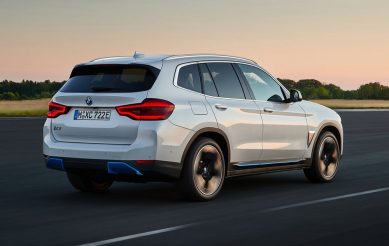 Inside, the differences are just as small and limited blue detailing, the BMW i logo on the door sills, a default blue hue for the ambient lighting, special instrument cluster graphics and readouts, iX3 badges on the centre console and upgraded seats. Adaptive suspension is however standard.

The centre of attention though is the powerunit which consists of an 80 kWh lithium-ion battery pack that produces 210kW/400Nm. Despite being limited to 180 km/h, the iX3 will get from 0-100 km/h in 6.8 seconds and according to BMW, travel 460 km on a single charge. Fitted as standard with regenerative braking, the 518 kg battery is mounted low down underneath the floor can be charged using a 7.4 kW or 11 kW charger, the latter poised to take 11 hours from a Wallbox unit.

When hooked-up to a 150 kW outlet, the charging time from 0-80% drops to 34 minutes with a 100 km range being attainable after only 10 minutes. In stark contrast to the regular X3 though, the iX3 is rear-wheel-drive only with BMW remarking that this affords drivers the opportunity to “enjoy a classic BMW rear-drive experience”. 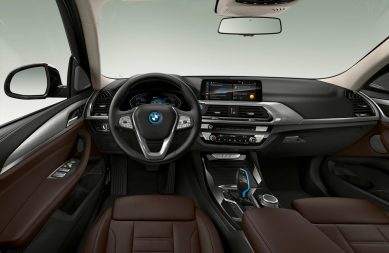 BMW South Africa has confirmed that the iX3 will be coming to market, but only from the fourth quarter of next year with pricing set to be announced closer or ahead of the actual launch date.