Despite the returning petrol engine, the new V6 turbodiesel is poised to be the biggest highlight. 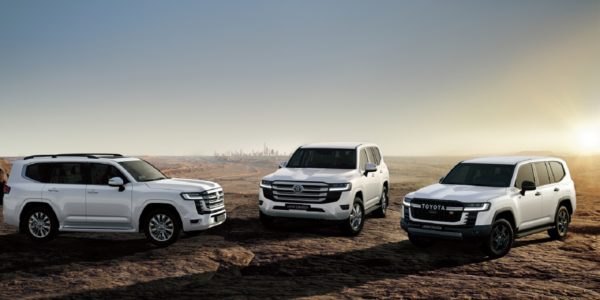 With examples of the all-new Toyota Land Cruiser 300 already arriving on dealership floors in key markets such as the Middle East, South Africa is preparing for the first all-new model in 14 years reportedly from next month.

Riding on a body-on-frame version of the TNGA platform known as GA-F that will underpin the next generation Hilux, Fortuner and Land Cruiser Prado, the 300 will be the first Land Cruiser since the 80-series, a model it was largely influenced by, not to have a V8 engine as the line-up will comprise two six-cylinder mills mated to a new automatic gearbox.

Although final specification has not been officially announced, the leaking of several marketing and sales documents on Instagram two months ago, which originated from Toyota South Africa, has effectively confirmed what buyers are in-line for come August.

The power of six

As evident by the mentioned documents, South Africa will receive both petrol and diesel variants of the Land Cruiser 300 with the former arriving first and the oil-burner from September.

In the case of the petrol, which returns after being discontinued from the 200-series six years ago due to poor sales, the previous 4.7-litre V8 makes way for the 3.5-litre badged twin-turbocharged 3.4-litre V6 taken from the Lexus LS 500, albeit retuned to produce 305kW/650Nm.

The main point of interest though is the new 3.3-litre turbodiesel bent-six that replaces the twin-turbo 4.5 D4-D V8 with outputs of 227kW/700Nm, an uptake of 32kW/50Nm despite the displacement decrease. A new ten-speed ‘box replaces the old six-speed self-shifter.

Along with the new drivetrains, the Land Cruiser 300 will see the introduction of two new trim levels with only the entry-level GX-R being carried over from the 200.

Replacing the VX-R, the ZX takes over as the range’s flagship with the off-road focused GR Sport fitting in between the pair despite using the latter as a base.

More capable than ever

Tipping the scales at 200 kg less than the 200, the Land Cruiser 300 is once again outfitted with a permanent four-wheel-drive system including a low range transfer case, as well as Toyota’s new Kinetic Dynamic Suspension System or e-KDSS that allows for the decoupling of the rear anti-roll bars to aid suspension travel on rough terrain.

Revealed only after the unveiling, the Land Cruiser 300 will have the option of three diff-locks along the drivetrain like the Mercedes-Benz G-Class, as well as a revised Multi-Terrain Select system with four modes; Auto, Sand, Rock and Mud, a Multi-Terrain underbody camera and a reworked Crawl mode activated only in low range.

Ground clearance is unchanged from the 200 at 230 mm with the same applying to the approach, departure and breakover angles of 32, 24 and 25 degrees. The claimed towing capacity is once again rated at 3 500 kg for a braked trailer.

Specced to the max

As big a departure as the 300 is from the 200 outside and underneath, the level of specification has been upped with the GR Sport and ZX receiving a new 12.3-inch touchscreen infotainment, while the GX-R gets a seven-inch display with embedded Tracks for Africa navigation. Both systems feature Apple CarPlay and Android Auto as standard.

Aside from the GR attire, both the GX-R and GR Sport are mounted 18-inch alloy wheels with the ZX boasting 20-inch wheels, as well as a chrome grille, illuminated door sills and a rear seat entertainment system with two 11.6-inch screens.

With the recent soaring in Land Cruiser 200 prices both on local shores and in Australia, the Land Cruiser 300 is set to attract a considerable premium over its predecessor.

As mentioned, only the twin-blown petrol will be offered initially and therefore only in ZX guise as the GX-R will be powered solely by the new diesel, which will be joined by the GR Sport in September.

Speculation therefore is that the GX-R will likely start at around R1.2-million as the equivalent 200 currently retails from R1.1-million, while the GR Sport could sport a price tag of around R1.5-million depending on the engine. With the current VX-R priced at R1.6-million, the ZX is likely to kick-off at R1.8-million, though as mentioned, nothing has yet been cast in stone.