This is it: Powered-up Toyota Hilux GR Sport revealed

An announcement regarding South African availability is expected soon, but as with the previous GR Sport, production will be limited. 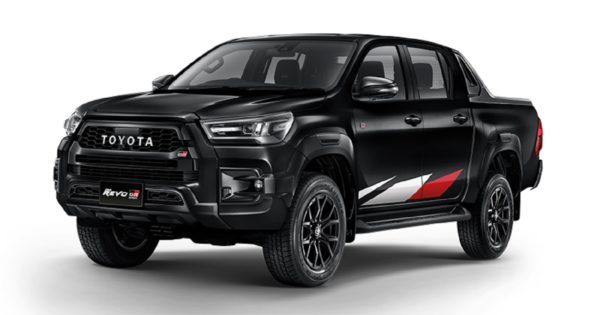 The announcement made yesterday (24 August), Toyota officially revealed the all-new Hilux GR Sport in Thailand in the early hours of Wednesday morning.

While GR graphics adorn both models, the four-wheel-drive eschews the low-rider’s 17-inch alloy wheels for 18-inch split-spoke wheels while also losing the integrated bumpers for more conventional items, the rear finished in black and the front being colour coded.

In addition, it also comes equipped with body colour matching extended wheel arches, side steps and a black sports bar with an integrated LED light.

As expected, Toyota has also tweaked the GR Sport’s suspension by equipping the four-wheel-drive with mono-tube shock absorbers and stiffer coil springs while dropping the ride height of the two-wheel-drive by 23 mm in order to “improve aerodynamics”.

Underneath the bonnet, the status quo remains unchanged with both models deriving motivation from the upgraded 150kW/500Nm 2.8 GD-6 turbodiesel engine matched solely to a six-speed automatic gearbox with gear shift paddles. Claimed ground clearance is 164 mm for the two-wheel-drive and 217 mm for the four-wheel-drive.

While not confirmed for South Africa at present, expect an announcement to be made soon with only the four-wheel-drive set for local market availability.

New Toyota Rumion: All you need to know
5 days ago
5 days ago

New Toyota Rumion: All you need to know
5 days ago
5 days ago