I was in Japan last year when the Datsun Go was a concept car and the closest we got to it was to look at a clay model. 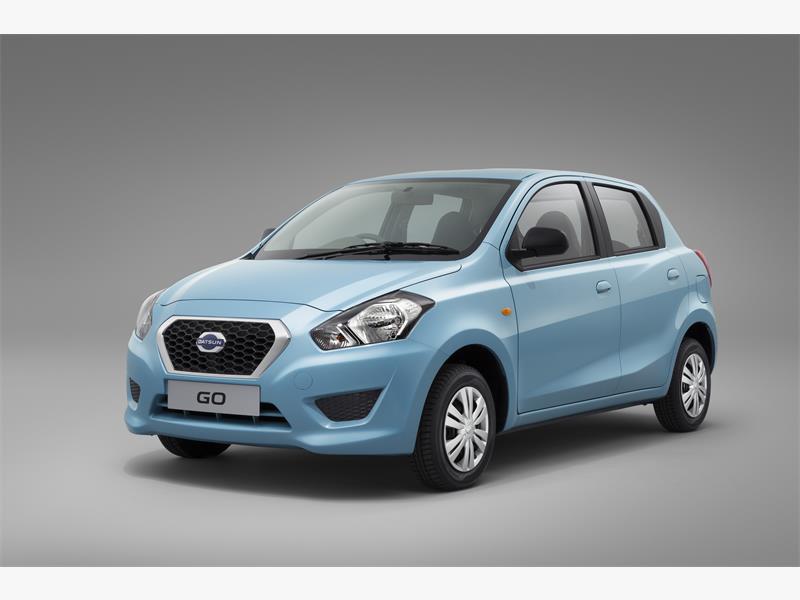 Then it was off to India to see the first actual production model leave the factory floor and attend the Auto Expo in Delhi, where we could get up close to the Go, but no drive was in the offering yet.

The car then made its way to South Africa and was shown to eager media, but again we couldn’t get to drive one. Finally I can report the Datsun Go was launched last week and we got one of the very first units on test drive.

I think first it must be said we are dealing with a new car that comes in at R89 500 for the mid model and only R99 500 for the lux model we had on test here. So although I have a rather nostalgic connection to the brand – I owned an old Datsun 140Y in my student and army days, I even started dating my wife while I had the car – I didn’t expect to be blown away by the new Datsun. And I wasn’t.

There are a few massive negatives that can’t be ignored, no matter how well intentioned Datsun’s plans are to bring affordable wheels to the people. Bearing in mind others also play in this sub-R100k segment, the Datsun Go deal is not exactly unique.

Right up front, the car is aimed at first-time car buyers and the younger generation, who by default are inexperienced drivers at best and need all the safety help they can get from their cars when taking to our dangerous roads. And here the Go doesn’t come with anti-locking brake system (ABS) or any air bags, so obviously you know the car won’t have any form of electronic stability program (ESP) on board either.

Yes, I understand driving around sure as hell beats walking around, although both seem equally dangerous in South Africa as almost 40% of all our road deaths are pedestrians. This being said, what do you get when you buy the car?

Styling wise you get a decent-looking hatchback that would appear so much better if they just fitted a bigger set of wheels to it. That raised stance on 13-inch skinny tyres with undercarriage showing doesn’t really work for me when it comes to the Go’s aesthetics.

Inside though, you get quite a bit of space, some basic hard-touch plastics and quite a few specs, such as an audio system that is a mobile docking station, allowing you to sync your smartphone directly with the car. Instead of being restricted to a radio and CD, you can also access the satellite navigation, hands-free telephone, USB port, music player and radio, all via your smartphone. You can opt for the traditional radio/CD combination like our test car had, but the reception was terrible. I looked around for an aerial and could not find one. I am sure this is just a slip on this particular car, and I would opt for the docking station if I was you.

You also get air-con and electric windows, but no central locking fob, so locking and opening the doors is done by inserting a key into the driver’s door lock. I am sure you will be able to get a remote fitted via a dealership if you want to pay the extra money.

Another annoying little issue is the boot can only be opened from a lever in the car, which means before you can load anything in the boot, you have to first open the car.

Keeping an open mind, I was actually pleasantly surprised by the urge the 1.2 litre three-cylinder 50kW/104Nm five-speed power plant produced.

Sure, it is no robot-to-robot racer, but you can get up to the national speed limit without too much fuss and keep it there up the hills if you are prepared to drop a gear or two.

I have to mention the electric power steering felt quite disconnected from the wheels, and also had a notchy feel to it once you were turning. I wouldn’t want to make an emergency lane change in the Datsun at freeway speed. The non-ABS braking did not inspire much confidence either.

The brake pedal takes very low down with no real feel, and it always seems like you are one hard dab on the pedal away from a lockup. This and the lack of obvious safety equipment is the Go’s biggest let down for me.

Moving back to the positives though, you can customise your Datsun with a wide range of accessories, available through the dealers – from body decals, branded seat covers, chrome fittings, roof rails and a spoiler to alloy wheels, which can all be purchased separately to help every Go have a look of its own.

The Datsun Go is available through 44 dealerships countrywide, with the aim of increasing this to 60 by March 2015.

Datsun dealerships will exist within the Nissan dealer framework with a mix of dedicated and common showroom configurations.

It is said the Datsun sales experience will be unique, and the level of after-sales service will be leveraged off the existing Nissan dealer network, but will this be enough to see people buying back into the brand? A three-year 100 000km warranty with roadside assistance comes standard, and owners can choose a range of add-on service and maintenance plans to suit their needs.

As much as I loved driving my Datsun with no ABS or air bags many years ago, times have changed plenty since then – when cars were dangerous and sex was safe. Nowadays cars are safe and sex is dangerous, and I certainly wouldn’t want my daughters or wife to drive a car without ABS, air bags or even ESP.

If you have to buy new, then the Datsun Go is no worse than the other safety-deprived offerings from China or India, so go have a look. But if I had R100 000 to spend on a car today, I would look at a slightly older, better-specced one before I entered a Datsun showroom.