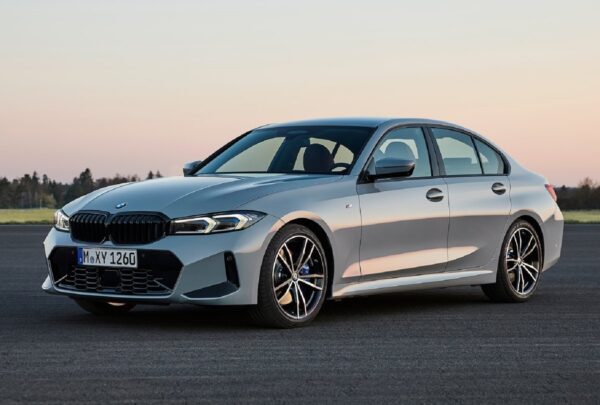 Although small, the changes to the 3 Series at the front are easy to spot.

Four years after making its world debut at the Paris Motor Show, and after a slew of pre-production spy shots emerged on various online platforms, BMW officially revealed the facelift 3 Series overnight ahead of sales commencing in July.

The first Three to use the CLAR platform, which, at launch, resulted in a 55 kg weight reduction over the previous F10 generation, the internally designated G20 3 Series retains the same overall dimensions, but with a fresh look not inspired by the 4 Series, the new 7 Series or indeed the updated X7.

At the rear, the 5 Series inspired LED taillights are thinner, the bumper redesigned and the exhaust pipes, increased in size from 90 mm to 100 mm, relocated closer to the flanks of the bumper itself.

As before, buyers can specify the 3 Series with the M Sport package, the M Performance that boasts the option of 19-inch alloy wheels and the new M Sport Pro that combines the M Sport with the Shadowline package in addition to also receiving red painted M branded brake calipers.

Inside is where the biggest changes can be seen, namely the new Curved Display that debuted on the XM and became available on the 7 Series earlier this month.

Along with new air vents, standard tri-zone climate control and an upgraded BMW Intelligent Personal Assistant system, the 3 Series takes leave of the gear lever as its place is now occupied by a toggle switch for the eight-speed Steptronic gearbox. The six-speed manual is therefore no longer available.

On the safety and driver assistance teach front, all 3 Series derivatives are outfitted as standard with Autonomous Emergency Braking that incorporates Pedestrian and Cyclist Detection, an upgraded camera system, Cruise Control and Lane Departure Warning.

Upfront, the 3 Series’ engine options are unchanged with 48-volt mild-hybrid assistance standard on the four-cylinder diesels and six-cylinder petrols.

Capping the range off is the M340i xDrive, whose 3.0-litre straight-six turbo outputs 274kW/500Nm. As evident by its name, the range-topper is also the sole model to have the xDrive all-wheel-drive system from the onset.

As for the hybrid models, both the 320e and 330e combine the four-cylinder petrol with an electric motor, which adds up to 50 kW and 83 kW respectively. Combined outputs are 150 kW and 215 kW.

Confirmed for South Africa from the third quarter of this year, the 3 Series will once again be offered only as a sedan with the Touring estate remaining a European model only.