Raptor R heralds the return of a V8 for the first time since 2014 and the long awaited rival for the Ram 1500 TRX. 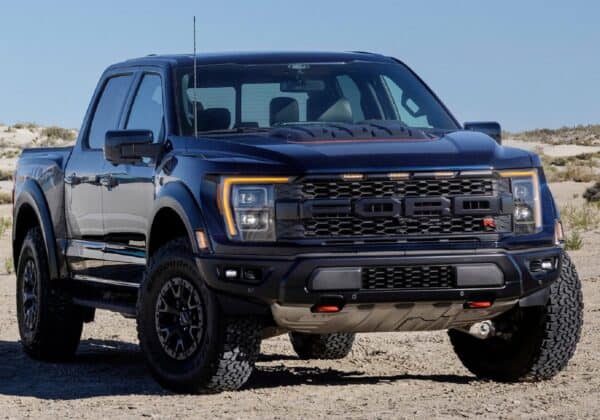 Still as menacing as before

Ford has officially hit back at criticism for the lack of a V8 engine in the F-150 Raptor by reviving the bent-eight for the newly introduced Raptor R.

Positioned above the standard Raptor that retains the twin-turbo 3.5-litre EcoBoost V6, the Raptor R marks not only the return of the V8 last offered in 5.4 and 6.2-litre forms between 2010 and 2014, but premiers on a vehicle Dearborn has dubbed the “ultimate Raptor”.

Like its V6 stablemate, the Raptor R is only available in SuperCrew double cab bodystyle and up front, utilises the 5.2-litre supercharged Voodoo V8 from the Shelby GT500.

As with the V6, the amount of twist is routed to all four wheels via the General Motors co-developed ten-speed automatic gearbox, which has been recalibrated and complimented by a larger diameter aluminium driveshaft, heavy-duty turbine damper and model specific torque converter.

In addition, Ford has made alterations to the supercharger by equipping it with a new pulley designed from the onset for better torque delivery from low-down in order to keep momentum up when off-roading.

The changes underneath continues in the shape of a redesigned front axle, a deeper oil pan, a new air intake system and a stainless exhaust manifold said to have been included as a result of buyer demand wanting not only more power, but also noise.

Included with the exhaust is an active valve system that changes the sound based on the setting of the drive mode selector, namely Quiet, Normal, Sport and Baja.

As with the Raptor, the Raptor R retains the five-link rear suspension and Fox Racing position sensitive dampers, but with longer trailing arms for the former, backed-up by 24-inch coil springs and increased by five percent front springs.

Carried over though is the electronically locking rear differential, the Terrain Management system with seven modes; Slippery, Normal, Tow/Haul, Sport, Rock Crawl and Baja, and the 37-inch all-terrain tyres offered as an option on the Raptor.

Externally, Ford has made comparatively subtle changes to distinguish the Raptor R from the Raptor. This includes the so-called power dome on the bonnet, Code Orange R badges on the grille and tailgate, and special graphics down the side of the loadbin and rear doors.

Inside, the bespoke touches include carbon fibre inserts with a tri-axial weave pattern and Recaro seats trimmed in leather and Alcantara with Raptor R embroidered higher-up seatbacks. Standard specification and features is otherwise unchanged from the Raptor.

Despite Ford having approved right-hand-drive for the standard F-150 from next year, but only in Australia, the Raptor R, like Raptor, remains a left-hooking model with no plans in place to have the steering gear on the right anytime soon.