Earmarked for South African introduction next year, Mitsubishi has unveiled an off-road inspired version of the seven-seat Xpander MPV for South East Asia.

Simply dubbed the Xpander Cross, the flagship model within the range differs mostly in terms of aesthetics, namely black cladding around the wheel arches, at the base of the doors and on the bumpers, satin silver roof rails, a Delica D:5 inspired front skidplate, black detailing on the tailgate, a bespoke rear skidplate and 17-inch alloy wheels. 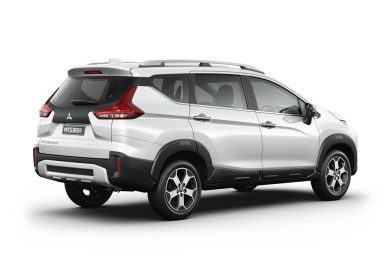 Sitting 20 mm higher off of the ground than the regular Xpander, meaning an overall ground clearance of 225 mm, and featuring two new exterior colours; Graphite Grey Metallic and Sunrise Orange Metallic, the Cross’ interior continues as is with the only differences being a black/brown finish combined with mesh silver inlays.

Up front, the normally breathing 1.5-litre petrol engine has also been kept unchanged with outputs of 77kW/141Nm, delivered to the front wheels via a five-speed manual or four-speed automatic gearbox.

As with its sibling, production of the Cross will take place at the Cikarang Plant in Indonesia which has so far built 104 000 Xpanders since the model’s debut two years, rating it as Mitsubishi’s fourth best-selling new model of 2018. Exact local market introduction however will only be divulged next year.