Not expected to be carried over into the final product though are the shaved, pop-out door handles and the oversized alloy wheels. Kia has commenced its teaser campaign of the all-new Sonet by revealing a pair of sketches ahead of the newcomer’s world debut at the Delhi Auto Expo in India next month.

Set to slot-in below the Seltos as the marque’s smallest crossover/SUV, the drawings sees the Sonet sporting the latest interpretation of Kia’s trademark Tiger Nose in the form of the concave, Stonic inspired grille and aggressive headlights with integrated daytime running LEDs,.

In addition, it also comes with a wraparound style rear LED light bar, bulging wheel arches, a dome shaped bonnet and prominent air inlets on either side of the front bumper. Not expected to be carried over into the final product though are the shaved, pop-out door handles and the oversized alloy wheels. 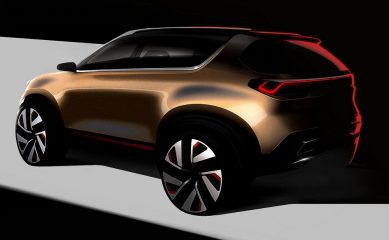 Riding on the same platform as the Hyundai Venue, the Sonet, which carries the internal moniker QYI, will more than likely feature the same dimensions and based on prior reports, come with a choice of three petrol engines; a normally aspirated 1.2 and 1.6 producing 61 kW and 90 kW respectively, the Venue’s 88 kW turbocharged 1..0 T-GDI and a single turbodiesel in the shape of a 1.4 CRDI outputting 66 kW.

Like its sibling, and indeed the Volkswagen T-Cross, Renault Captur, Ford EcoSport and Toyota C-HR, the Sonet will be front-wheel-drive only and come with either a five-or-six- speed manual transmission, as well as a CVT plus a seven-speed dual-clutch automatic depending on the engine.

As with the Seltos, production is expected to take place at the Anantapur Plant in Andra Pradesh, but for the moment, no word of availability in South Africa has been made.