i20 will initially come powered by a choice of two petrol engines; a normally aspirated 1.2 that produces 63 kW and a 1.0 T-GDI in two states of tune. Previewed in a series of sketches at the beginning of the month before leaking online earlier this week, Hyundai has officially unveiled the all-new i20 ahead of its world premiere at the Geneva Motor Show next month.

The latest model to incorporate the brand’s ‘Sensual Sportiness’ styling language, a first for Europe, the i20 boasts a more aggressive design highlighted by new, angular and thinner LED headlights, a tapering bonnet derived from the Sonata, honeycomb grille on some models, air inlets on either side of the front bumper and up to 17-inch alloy wheels.

Longer and wider than its predecessor with Hyundai claiming a 10 mm increase in wheelbase, five millimetres in overall length and 30 mm in width despite the roof, which can be had with a two-tone Phantom Black hue being 24 mm lower, the rear features new lights that cuts into the wings and comes connected by a thin central strip, as well as a faux diffuser and spoiler integrated into the tailgate. 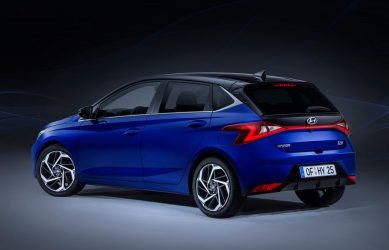 In spite of showcasing the interior in a sketch, confirmed tech, likely to depend on the trim level, will include a 10.25-inch touchscreen infotainment system with Apple CarPlay and Android Auto, wireless smartphone charger, a 10.25-inch digital instrument cluster and an eight-speaker Bose sound system.

Up front, the i20 will initially come powered by a choice of two petrol engines; a normally aspirated 1.2 that produces 63 kW and a 1.0 T-GDI in two states of tune; 74 kW and 88 kW. While the free-breathing engine is paired as standard to a five-speed manual gearbox, the lesser powered blown three-pot is equipped with six-speed manual or a new seven-speed dual-clutch.

Reserved for the flagship 1.0 T-GDI engine however is a new function for the manual ‘box known as Intelligent Manual Transmission (iMT) that uncouples the engine from the transmission when the throttle is released, while the engine itself is backed-up by a 48-volt mild-hybrid system that can be specified as an option on the 74 kW model.

In Europe, sales of the i20 will commence soon after its debut in Geneva, but while nothing has yet been said about South Africa, expect sales to kick-off later this year.