Revealed towards the end of last year, Mercedes-Benz has taken the wraps off of the AMG-fettled GLA in the form of the 45 and 45, ahead of both models’ debut at the Geneva Motor Show next month.

Heading the GLA range and replacing the GLA 35 that has been serving as the range’s flagship until now, the 45’s exterior differences are prominent and consists of the now familiar Panamericana grille, a new front bumper with wider air intakes, a silver chrome front splitter, dual exhausts integrated into the rear apron and 10-spoke 19-inch light alloy wheels with the S getting five twin-spoke 20-inch alloys as standard, along with oval tips for the exhaust.

Retaining the same dimensions as the standard GLA, the changes underneath the 45 and 45 S’ skins are extensive and includes the AMG Ride Control adaptive damping system with three modes, an AMG specific suspension layout made-up of MacPherson struts at the fronts, aluminium wishbones, retuned geometry and a four-link design at the rear, retuned steering, the AMG Dynamic Select system with six modes; Comfort, Sport, Sport+, Individual, Slippery and Race in the case of the S and the electro-mechanical AMG Torque Control system. 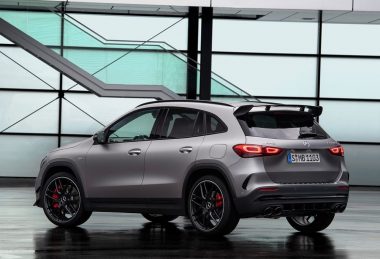 In addition, both receive uprated brakes with the standard stoppers comprising a grey AMG painted four-piston fixed caliper setup at the front and single-piston at the rear with disc measurements of 350 mm and 330 mm respectively, while the S can optionally be equipped with a red six and single piston caliper arrangement with the front discs measuring 360 mm and the rears unchanged at 330 mm.

Building on the A35, the A45’s interior has also had a makeover and incorporates the optional AMG Performance sport seats trimmed in Artico man-made leather and Dinamica micro-fibres with red top stitching and faux carbon fibre inlays or Neva Grey/Black Artico with mid-grey stitch work and light aluminium inserts, red designo seatbelts and unique AMG graphics within the 10.25-inch MBUX infotainment system and digital instrument cluster.

Bespoke to the GLA 45 S but available as an option on the standard 45 is the AMG Performance steering wheel finished in Dinamica and Nappa leather with black, red or yellow stitching with galvanised gear shift paddles attached. 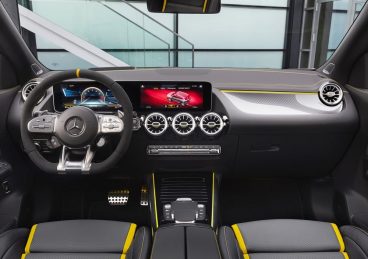 Paired to the same eight-speed dual-clutch gearbox with AMG’s Performance optimised 4Matic+ system sending the amount of twist to all four wheels, the 45 will more than likely reach a top speed of 250 km/h and the S 270 km/h as no performance figures were announced.

With the regular GLA still to make to its local market debut, expect the 45 to arrive around mid-year, although only in S guise with official specification still to be made.