On the flagship Initiale Paris, Nappa leather with Cognac stitching finished in the latter hue pair star along with a new ceruse wood finish. Renault has reaffirmed its commitment to the ever shrinking D-segment in Europe by unveiling the facelift Talisman sedan and Grandtour estate ahead of both models’ debut in Geneva next month.

Entering its fifth year of production since replacing the Laguna, the Talisman’s exterior tweaks are subtle and revolves around a redesigned front bumper and grille with more chrome detailing, the now trademark C-shaped headlights that cuts into the bumper and boasts Matrix LEDs and dynamic indictors, full LED taillights also with dynamic indicators, 17-inch Pierre, 18-inch Stellar or 19-inch Sato alloy wheels and a choice of three new colours; Highland Grey, Vintage Red and Baltic Grey. Also new is a frameless electro-chromatic rear-view mirror, larger cupholders with chrome detailing and back lighting on the centre console, a digital display for the climate control panel, a wireless smartphone charger and cruise control switches relocated to the steering wheel.

Additional differences from the outgoing model involves a new selection of materials with entry-level derivatives featuring optional leather trim, while the next step-up Intens receives Riviera leather in Castenyera Brown, Titanium Black and Light Sand-Grey. On the flagship Initiale Paris, Nappa leather with Cognac stitching finished in the latter hue pair star along with a new ceruse wood finish option and a 13-speaker Bose sound system. Up front, Renault has reworked the Talisman’s range of petrol and diesel engines, with the entry-level powerunit being the TCe 160 that uses the 1.3-litre turbocharged co-developed with Daimler rated at 120kW/270Nm. It is paired as standard to a seven-speed EDC gearbox and claimed to consume unleaded at 6.2 L/100 km.

Capping the petrol range off, the TCe 225 comes powered by the same 1.8-litre turbocharged engine as the Alpine A110, and Megane RS with rated outputs of 165kW/300Nm. Also mated to a seven-speed EDC, the drivetrain has a claimed fuel consumption of 7.4 L/100 km and while carried over from the pre-facelift model, is now the only other petrol option available with the 1.6 TCe 150 and 200 engines having been dropped. 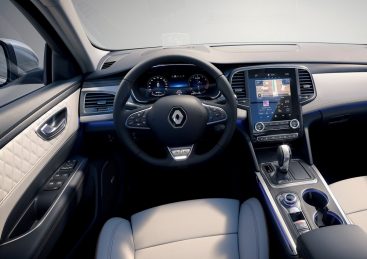 Going on sale on the Old Continent from June, the Talisman won’t be offered in South Africa anytime soon.