Four personalised leather options, each named after a famous Paris quarters, can be specified as part of DS’ Inspirations catalogue. Returning to the large sedan segment since in Europe after ending production of the C6 eight years ago, Citroën, under the auspices of its upscale DS Automobiles division, has unveiled the all-new DS 9 that will make its public debut at the Geneva Motor Show next month.

The third and flagship model that makes-up the DS range after the DS 3 and DS 7 Crossback, the DS 9 is based on a stretched version of parent company PSA’s EMP2 platform that underpins the long wheelbase Peugeot 508 L in China.

Sporting dimensions of 4 933 mm in overall length, a wheelbase of 2 895 mm, height of 1 468 mm and width of 1 855 mm, it features a coupe-like appearance with a sloping fastback rear-end similar to not only the C6, but, from some angles, the four-door Mercedes-AMG GT. Said to take styling inspiration from the original Citroën DS and claimed by the marque as representing an “invitation to rediscover French excellence”, the Nine, in true large Citroën fashion, is loaded with equipment such as heated, cooled and massaging leather seats, an Alcantara roofliner, digital instrument cluster, an expansive touchscreen infotainment system and a specially developed 14-speaker Focal Electra sound system.

In addition, four personalised leather options, each named after a famous Paris quarters, can be specified as part of DS’ Inspirations catalogue; Bastille, Rivoli, Performance and Opéra, the latter featuring a multi-contoured ambient lighting system and an Art Rubis leather wrapped steering wheel.

The DS 9’s tech is most evident underneath its skin and in the safety and driver assistance fields though, with features such as adaptive Active Scan Suspension, Driver Attention Monitoring, Smart Access that allows the driver to use his/her smartphone as opposed to a key, Drive Assist that results in Level 2 semi-autonomous driving at up to 180 km/h, Adaptive Cruise Control, Park Pilot, Active LED Vision headlights and a Night Vision system that detects not only other vehicles, but also pedestrians, cyclists and animals. 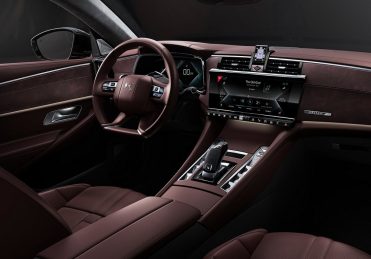 Initially, the DS 9 will be a plug-in hybrid model only as per the E-Tense nomenclature, and pair the 1.6 PureTech turbocharged petrol engine with an 11.9 kWh lithium-ion battery pack for a total system output of 166 kW and an all-electric range of up to 50 km/h at speeds below 135 km/h.

Debuting later are two more PureTech E-Tense models; a 184 kW version and a 265 kW model with four-wheel-drive. A conventional petrol powered derivative with 166 kW will join at a later, with all the powerunits being mated as standard to an eight-speed automatic transmission.

Going on sale during the second half of the year, the DS 9 will be built in China by PSA affiliate Changan who also produces the Kaicheng F70 that forms the base of the Landtrek pick-up. Despite being classified as an international model, it remains highly unlikely that PSA South Africa will introduce the DS 9 to the local market at any stage.