McLaren has constructed the floor out of a single piece of carbon while at the same time fitting carbon fibre shelled racing seats. Having recently introduced the GT to South Africa, McLaren has paid tribute to the longtail F1 GTR by unveiling the 765 LT that was to have premiered at the Geneva Motor Show.

Touted by Woking as being the opener of a new chapter in its longtail lineage, the LT uses McLaren’s Super Series of models as a base, but puts the focus squarely on on-track performance by being lighter and without some the equipment featured on the 720 S.

Making extensive of carbon fibre in not only its lengthened body, but also the front splitter, front and rear bumpers, side skirts, diffuser, rear wing and even the number plate cavity, McLaren has constructed the floor out of a single piece of carbon while at the same time fitting carbon fibre shelled racing seats that are 18 kg lighter than those of the 720 S.

With the option of the having the doors, bonnet and fenders, which are constructed as standard out of lightweight aluminium, also made out of carbon, the 765 LT further boasts a carbon central tunnel, window switches and an Active Dynamics Panel while also being equipped with thinner glass and doing without storage pockets, a sound system and air-conditioning, the latter pair available though as no-cost options. Continuing the weight loss regime is a full titanium exhaust system that weighs 10.9 kg, a lightweight polycarbonate rear window, optional Super-Lightweight Carbon seats taken from the Senna, a lighter lithium-ion battery that ticks the scales at three kilograms and even lightweight Alcantara trim throughout the cabin.

Not escaping the weight saving measures either are some of the LT’s under-skin component with the springs being 1.5 kg lighter and the alloy wheels, wrapped in model specific Pirelli PZero Trofeo R rubber, being made out of ultra-lightweight alloy complete with titanium wheel nuts.

Available with the same brake pads and carbon ceramic discs as the Senna, albeit as an optional extra, the 765 LT weighs in at 1 339 kg, a reduction of 80 kg over the 720 S, with McLaren claiming an improvement in downforce of 24% despite the longer overall length.

Fitted with the three-mode (Comfort, Sport and Track) Proactive Chassis Control II suspension system, motivation for the LT comes from the familiar 4.0-litre twin-turbo V8 that has been retuned to produce, as its name states, 765 PS or 563 kW with torque amounting to 800 Nm. 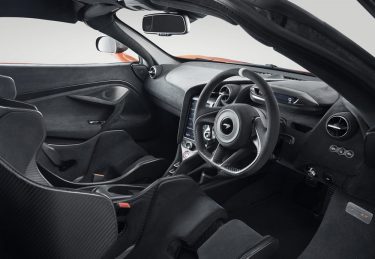 Pumping out 33kW/30Nm more than the 720 S, the 765 LT will reach 100 km/h from zero in 2.8 seconds, 0-200 km/h in 7.2 seconds and reach a V-Max of 330 km/h. Entrusted with sending the amount of twist to the rear wheels is a seven-speed paddle-shift sequential gearbox that comes with a new limit downshift function that changes gear accordingly without over-revving the engine.

Available in a choice of 17 colours with a further 12, as well as a myriad of exterior and interior customisation coming from McLaren’s Special Operations division, the 765 LT will be limited to 765 units with no pricing have been revealed.