All-new Toyota Harrier unveiled as preview of next Lexus RX

First time features include a digital rear-view mirror and a panoramic roof with an electrically operated sunshade. Toyota has previewed the next generation Lexus RX in the form of the Japanese market Harrier set to go on sale in June. Entering its fourth generation, the Harrier not only sees a change of attire but also architecture in that it swaps its seven year old predecessor’s New MC platform for the same GA-K as the RAV4. As part of the new underpinnings, a MacPherson strut setup is utilised at the front and a double wishbone design at the rear. 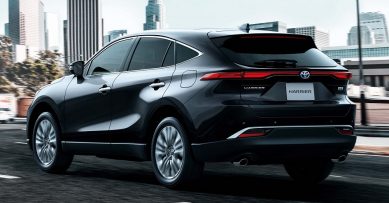 Inside, the interior takes inspiration from the RAV4 in the shape of the centre console, steering wheel and gear lever, with the rest of the facia being new in adopting a X-design and topped by a 12.3-inch infotainment system equipped with Apple CarPlay and Android Auto. First time features include a digital rear-view mirror similar to the Range Rover Evoque and a panoramic roof with an electrically operated sunshade. Higher-end models also come standard with a nine-speaker JBL sound system.

Pre-Collision Braking with Pedestrian and Cyclist Detection, as well as so-called Intelligent Clearance Sonar with Parking Support Brakes has been added to the Harrier’s safety and driver assistance sheet as part of the updated Toyota Safety Sense system.

Up front, the Harrier comes powered by a two Dynamic Force petrol engines; a normally aspirated 2.0-litre producing 125kW/207Nm and a 2.5 supplemented by an electric motor for a total system output of 160 kW or 163 kW in all-wheel-drive models due to the fitment of a secondary rear axle mounted electric motor as part of the E-Four system. Regardless of the powerunit, both are paired to the ten-step Direct Shift CVT.

In Japan, the Harrier will be offered in three trim levels; G, X and Z with pricing not yet announced. Until its Lexus sibling debuts either later this year or in 2021, don’t expect to see the Harrier in South Africa anytime soon.