Signalling the first three-pot in the history of the Land Rover and Range Rover brands, the unit will carry the P300e moniker and combine an all-new 147 kW 1.5-litre Ingenium turbocharged petrol engine with an 80 kW electric motor mounted on the rear axle for a total system output of 227kW/540Nm. 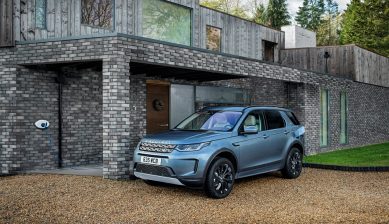 Linked to a specifically designed eight-speed automatic gearbox that is a claimed to be five kilograms lighter than the standard nine-speed ‘box, the Evoque offers an all-electric range of 66 km and a claimed WLTP fuel consumption of 1.4 L/100 km, while the Discovery Sport will travel 62 km on a single charge and sip unleaded at a rate of 1.6 L/100 km. In terms of performance, both are limited to 135 km/h in EV mode with the Evoque getting from 0-100 km/h in 6.4 seconds and the Discovery Sport in 6.6 seconds.

Equipped with three driving modes, the mentioned all-electric EV, Hybrid and SAVE that makes use of the petrol engine only in order to avoid depleting the battery, both models come as standard with a so-called Mode 2 Charging Cable that results in a charging time from flat to 100% of six hours 42 min using a conventional household socket. Opting for a bigger seven kilowatt wallbox however cuts the time from flat to 80% down to one hour 42 min. Plugged into a 32 kW fast charger and the waiting time from 0-80% drops to half-an-hour. Aside from the charging point and P300e badge on the bootlid, no additional exterior or interior changes have been made.

Set to go on sale next year, no indication of either coming to South Africa has so far been made.