The actual styling of the BT-50 has been open to speculation and to a series of online renders. The eagerly awaited unveiling of the all-new Mazda BT-50 is reportedly set to take place next month based on a new report from Australia.

Just over two weeks ago, carsguide.com.au reported that production of the BT-50’s twin, the Isuzu D-Max, has resumed in Thailand after the Coronavirus forced the closure of its Samrong and Gateway plants. Allegedly though, the pandemic was said to have interfered little with the D-Max’s planned debut Down Under in July, thus igniting speculation that Hiroshima could be taking the wraps off of its equivalent earlier than next year.

In a reversal of the previous BT-50 though which debuted two months after long-time parent company Ford had introduced the T6 Ranger in 2011, carexpert.com.au, citing an alleged Mazda dealer, claims that a pre-production example has already touched down on local shores, and that it would in fact premiere a month before the D-Max does. 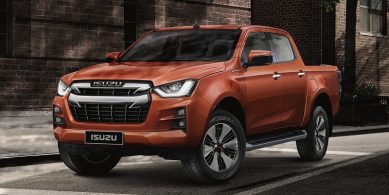 As is already known, the BT-50 wall eschew the mentioned T6 platform for Isuzu’s Dynamics Drive architecture and replace the 2.2 and 3.2-litre Duratorq engines with the 3.0 D-TEQ that produces 140kW/450Nm. Transmissions will include a six-speed manual or a six-speed automatic, with drive either going to the rear-or-all-four-wheels. Bodystyles are likely to include the Freestyle Cab and double cab.

Aside from what lies underneath its skin, the actual styling of the BT-50 has been open to speculation and to a series of online renders ever since Mazda Managing Executive Officer and Head of Design, Ikuo Maeda, told Wheels Magazine three years ago that implementing Mazda’s Kodo design language would be a significant challenge. Also an unknown entity is the interior as it remains to be seen whether it would be identical to the D-Max with Mazda badges merely replacing the Isuzu ones, or if it would be different in terms of the actual design and layout.

Given the timing of the report, chances are that the mentioned pre-production model could soon makes its debut online via leaked images or details.