Crossing over new Citroën C4 officially in the clear

Chairs provide a “pleasant feeling of comfort, well-being and support” in addition to “giving everyone on-board the impression that they are sitting in an armchair”.

After an unexpected reveal earlier this month but with very little being revealed, Citroën has now detailed the all-new C4 ahead of its European market debut later this year.

Signalling a radical departure from the previous two generations, the C4 eschews the traditional hatchback design and look for a fastback-styled crossover with the rear seemingly borrowing traits from the Mitsubishi Eclipse Cross, the previous generation C5 and the long since discontinued North American Acura ZDX.

Said to pay homage to the GS that celebrates its 50th anniversary this year, the C4 rides on parent company PSA’s EMP1 platform also used by the new Opel Mokka and Peugeot 2008, and measures 4 360 mm in overall length with a wheelbase of 2 670 mm, height of 1 525 mm and width of 1 800 mm. Claimed boot space is 380-litres that expands to 1 250-litres with the rear seats down.

Sporting a ground clearance of 156 mm, and with a choice of six alloy designs ranging from 16 to 18-inches, the C4’s interior rates as a significantly redesigned version of the Cactus’, with tech being the main drawing card. In this regard, it comes with a ten-inch touchscreen infotainment system with Apple CarPlay and Android Auto, four USB ports, a wireless smartphone charger, a digital instrument cluster and ambient lighting with two colours; Hype Red and Metropolitan Blue. 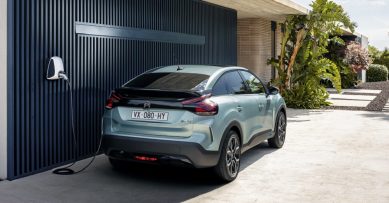 Equipped with no less than 16 storage areas amounting to 39-litres, the C4 introduces Citroën’s new Advanced Comfort Seats that comes as standard across the range. According to the automaker, the chairs provide a “pleasant feeling of comfort, well-being and support” in addition to “giving everyone on-board the impression that they are sitting in an armchair”. Depending on the trim level, the fronts are heated and also come with a massaging function.

In total, six interior colours are offered; the standard with cloth seats, Urban Grey with faux black leather, Metropolitan Blue or Grey and Hype Black or Red, both with leather upholstery and grey Alcantara in the case of the latter. Also reserved for higher specification models is an eight-speaker Arkamys sound system, rear dual-zone climate control air vents and a heated steering wheel as well as windscreen.

Likely to serve as an indication of what to expect from future Citroëns, the C4’s safety and driver assistance sheet, either standard or optional, includes a 360 degree camera system, static cornering LED headlights, a reverse camera and Park Assist, Hill Start Assist, keyless entry and a colour Heads-Up Display. 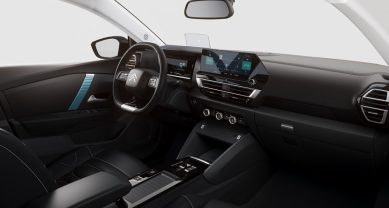 As alluded to in the most recent teaser, the C4’s comfort aspect also includes the new Progressive Hydraulic Cushion suspension system that consists of two hydraulic stops Citroën claims has been optimised to soak-up bumps and avoid otherwise massive jolts over poor surfaces.

Underneath its bonnet, the C4 will be powered by the familiar 1.2 PureTech turbocharged petrol engine in three states of tune; 74 kW, 96 kW and 115 kW and on the diesel side, the 1.5 BlueHDI outputting 81 kW or 96 kW. Transmissions consist of a six-speed manual or toggle-operated eight-speed automatic, the latter optional on the 96 kW petrol but standard on the 115 kW variant as well as on the top-spec diesel.

In total, the ë-C4 can be charged in three ways; from a standard household socket, from a 32-amp outlet in 7.5 hours or in five hours using the optional 11 kW on-board charger and lastly from 0-80% in 30 min when using a 100 kW charger. Like its mentioned siblings, the ë-C4 comes with three driving modes; Eco, Normal and Sport. 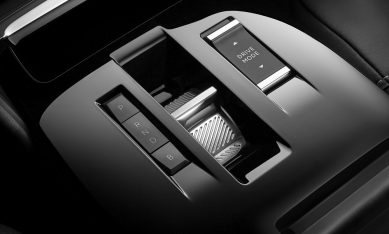 At present, no pricing has been announced, while it remains to be seen whether Citroën will see it fit bring the C4 back to South Africa. If approved, expect it to arrive next year most likely with the PureTech engines only.