Mini’s most potent model ever made touches down 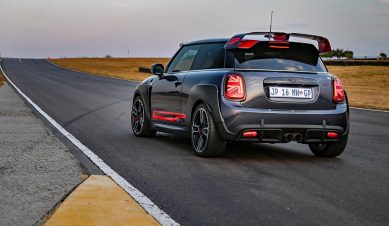 Officially the fastest and most powerful Mini to roll-out of the Oxford Plant, the GP makes use of the same 2.0-litre turbocharged engine as the Cooper S and standard JCW, but with an output of 225kW/450Nm as opposed to the latter’s 170kW/320Nm. Mated to an eight-speed Steptronic gearbox with a mechanical locking differential included, the JCW GP will get from 0-100 km/h in a claimed 5.2 seconds and reach a top speed of 265 km/h. 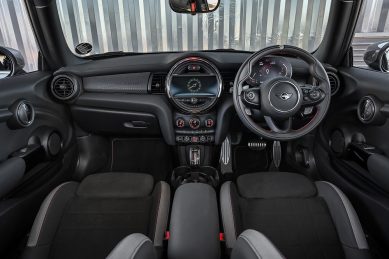 Lower than the JCW and stripped out like previous generations with the rear seats making way for a red cross brace, the Racing Grey Metallic GP tips the scales at 1 255 kg and rides as standard on lightweight 18-inch forged lightweight alloy wheels with technical revisions consisting of a dual outlet straight-piped exhaust system, new cooling system and upgraded brakes utilising a four-piston caliper at the setup and single floating caliper at the rear with the ventilated Chili Red aluminium front discs measuring 360 mm. 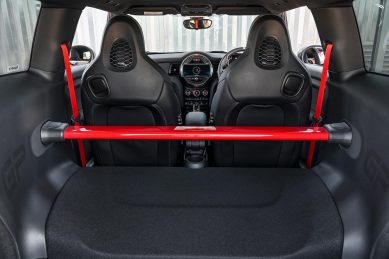 Only available with three-doors, Mini has confirmed that only 38 of the 3 000 GPs build will be offered in South Africa with pricing, surprisingly, not listed on the official media release or the Mini website.