Exterior changes are small but a new plug-in hybrid tops the drivetrain line-up in addition to a slew of interior tweaks. UPDATED: Jaguar Land Rover South Africa has confirmed that the updated E-Pace will be arriving on local shores in the first quarter of next year with final specification and price to be announced closer to or at the actual launch.

Following updates to the XE, XF and F-Pace, Jaguar has provided its smallest SUV, the E-Pace, with a series of revisions mainly reserved for the interior and underneath the bonnet.

Outwardly, the changes are minor and includes the fitting of a new mesh grille and redesigned front bumper, new side vents resplendent with the Jaguar leaper, Coventry’s new double J LED headlights, a refreshed rear bumper and I-Pace inspired taillights. As before, buyers also have the option of the black appearance package or the sporty R-Design. 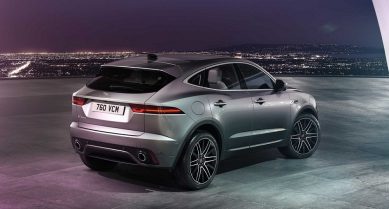 Like its bigger sibling, the E-Pace’s assortment of 2.0-litre Ingenium turbocharged petrol and diesel engines have all been updated to include mild-hybrid assistance on some, with a new downsized plug-in hybrid joining the line-up for the first time.

In terms of petrol power, three variants of the mentioned 2.0-litre are offered, all with electrical assistance and paired to a nine-speed automatic gearbox; the P200 that produces 147kW/340Nm, the 183kW/365Nm P250 and the flagship P300 which delivers 221kW/400Nm.

Diesel motivation comes in the form of the new D160, which does without hybrid assistance in front-wheel-drive guise, but features the system when selected with all-wheel-drive. Outputting 120kW/380Nm, the all-paw model also comes with the mentioned automatic ‘box as standard whereas a six-speed manual stars on the front-wheel-drive. 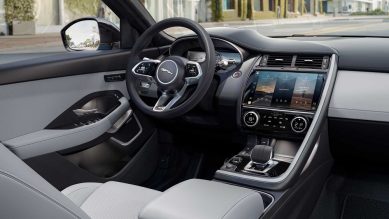 The oil-burning line-up is capped off by the D200 which replaces the D180 and D240 with an output of 147kW/430Nm. The all-wheel-drive system and nine-speed ‘box is standard fare but like on the Range Rover Velar, without hybrid assistance.

Concluding the range is the plug-in hybrid P300e which combines the new three-cylinder 1.5-litre petrol engine also used in the Evoque, with an 80 kW rear axle mounted electric motor for a total system output of 227kW/540Nm. Mated to a bespoke eight-speed automatic gearbox, the PHEV has a claimed all-electric range of 55 km and will accelerate from 0-100 km/h in 6.5 seconds.

In the UK, three trim grades will be offered; S, SE and HSE with a Sport package available on the P300 which consists of diamond-turned five-spoke black 20-inch alloy wheels, the mentioned black pack, an electric tailgate, illuminated Jaguar branded treadplates, Ebony, Cloud or Deep Garnet finished R Dynamic Taurus sport seats, an Ebony suede-cloth roofliner and the otherwise optional Meridian sound system. South African market availability is set to kick-off next year but without the inclusion of the PHEV or the manual equipped diesel.