Engine line-up for next generation Prado will not, at present, include the all-new 3.3-litre turbodiesel V6.

With Toyota poised to unveil the all-new Land Cruiser 300 in April next year, a new report from Japan has shed more light on not only it, but also the next generation Prado set for introduction in 2022 and not 2023.

Although continues details of the former have been emerging over the last 12 months, including the retention of a V8 engine in some markets, together with the introduction of the 3.3-litre turbodiesel V6 in place of the current 4.5 D4-D V8, Best Car claims that a GR Sport variant is under development with the main difference being a revised suspension.

The online publication further claims that the 300, which will ride on a body-on-frame version of the TNGA platform known as TNGA-F, and measure 4 950 mm in overall length with a wheelbase of 2 900 mm, width of 1 985 mm and height of 1 880 mm, will be offered solely with a six-speed automatic gearbox regardless of engine option, in addition to a full-time four-wheel-drive system with selectable low range as already stated.

Contrary to previous claims though, the hybrid, a Land Cruiser first, will feature not only a turbocharger, but also a 48-volt mild-hybrid system, however, this remains to be confirmed. Unlike its siblings though, the unit will be matched to the innovative Multi Stage Hybrid transmission made up of a four-speed automatic ‘box  and a CVT for an effective ten-step configuration. 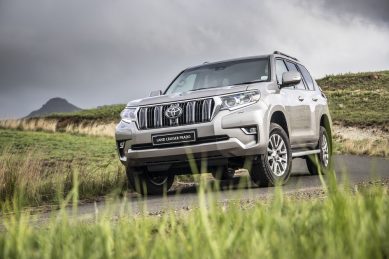 Meanwhile, the publication states that the Prado, tipped to move to the same TNGA-F architecture, will keep not only its body-on-frame construction, but also revised suspension in the form of a double wishbone design at the front and coil springs at the rear. As previously reported, the replacement for the current eleven year old J150 will allegedly have dimensions of 4 825 mm in overall length, a wheelbase of 2 790 mm, width of 1 885 mm and height of 1 830 mm.

Set to provide seating for eight, up front, the Prado will utilise the upgraded the 2.8 GD-6 as its flagship engine, as well as a 2.5-litre hybrid that will replace the stalwart 2.7-litre petrol. Although no word about the 4.0-litre V6 was divulged, Best Car claims that a second hybrid unit is being developed, an all-new 2.4-litre turbo-petrol with details surrounding it being unknown at present. Despite being earmarked for the forthcoming GR Hilux, the Prado, for now, is not tipped to receive the 3.3-litre turbodiesel V6.

Given the rate at which details have been emerging over the last few months, don’t be surprised if more are divulged or speculated upon before the end of the year.