Confirmation of only the eight-speed dual-clutch 'box suggests the Kona N will be fitted exclusively with the 206 kW 2.0-litre engine Hyundai has commenced teasing the performance Kona N ahead of its world debut later this year. Based on the facelift model unveiled last year, the extensive exterior only images sees the still camouflaged N sporting the distinctive N honeycomb grille, sportier front and rear bumpers, black alloy wheels, the just visible N-badged red brake calipers, a deep lower air intake at the front, dual exhaust outlets and a spoiler integrated into the tailgate.

Joining the i20 N and i30 N, the Kona also represents Hyundai’s first performance SUV with the automaker confirming it will derive motivation from a 2.0-litre turbocharged engine, more than likely with the same outputs, 206kW/392Nm, as the recently facelifted i30 N Performance. 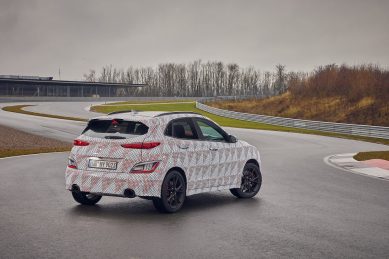 Unlike the i30 N though, the Kona N will seemingly only be offered with the new eight-speed dual-clutch gearbox as no mention of the standard six-speed manual or lesser 184kW/353Nm engine was made. As already indicated however, the Kona will be the first N model to feature all-wheel-drive with Hyundai also confirming the standard fitting of launch control plus a “variety of high-performance driving features”.

More details as well as a launch date will be announced in due course.