Land Cruiser 300 arrives powered, from September, by the new V6 turbodiesel engine and for the first time in six years, a petrol. 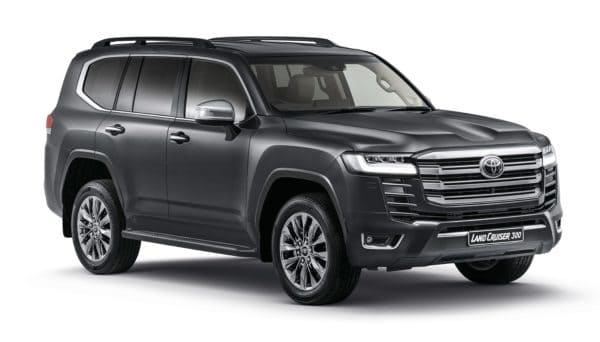 The first all-new Land Cruiser in fourteen years and the first to ride on the dedicated new TNGA body-on-frame platform called GA-F that will underpin the next generation Hilux, Land Cruiser Prado, Fortuner and the imminent North American Tundra, the 300 sees the return of the petrol motivation for the first time in six years, but like the new turbodiesel engine, with six-cylinders only.

Three models to choose from for the new Toyota Land Cruiser

Taking styling inspiration from the Land Cruiser 80 that bowed out in 1997, the 300, as indicated by leaked Toyota South Africa documents posted on Instagram two months ago, comes in a choice of three trim levels; the carryover entry-level GX-R, the new ZX that replaces the VX-R and the off-road focused GR Sport (GR-S) that sits at the top of the range.

In terms of aesthetics, the GX-R, which will only be offered with diesel power, sports a black grille and front bumper, colour-coded door handles and 18-inch alloy wheels, while the GR-S gains model specific 18-inch alloys, GR bumpers and door sills, a black GR grille, satin silver front and rear skidplates and black mirror caps. Reserved for the ZX are 20-inch alloys, colour coded bumpers and a chrome grille.

On the specification front, all three models feature as standard LED headlights with daytime running LEDs and fog lamps, a multi-function leather covered steering wheel and all around parking sensors in addition to the following:

Doing without the KDSS, the ZX completes the line-up with its only distinguishing features being a rear-seat entertainment system made up of two 11.6-inch screens plus wireless headphones and an electronically locking front and rear differential.

The power of six

Paired to the new ten-speed automatic gearbox, both models have a limited top speed of 210 km/h with claimed fuel consumption of 12.1 L/100 km for the petrol and 8.9 L/100 km for the diesel.

Ground clearance across the range is 235 mm with approach angles of 32 degrees for the GX-R and GR-S and 24 degrees for the ZX. Braked trailer towing capacity is rated at 3 500 kg regardless of the engine.

Toyota Land Cruiser 300: How much will the car cost in South Africa?

Initially, only the petrol powered ZX will be offered with the GR Sport and diesel derivatives following in September. Standard across the line-up though is a three year/100 000 km warranty as well as a nine service/90 000 km service plan.