Models set to feature will range from the 'standard' e-tron SUV to the potent RS e-tron GT sedan. 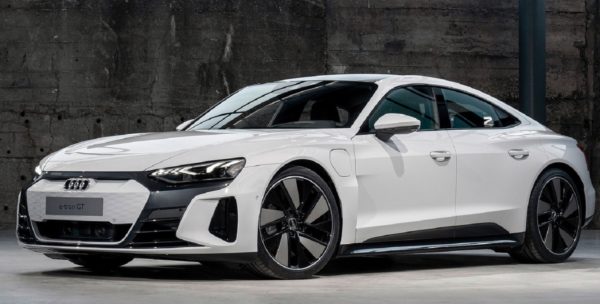 e-tron GT will serve as the entry-level GT model.

Audi has set its electrification plans for South Africa in motion by announcing a line-up of six e-tron models confirmed from early next year.

Previewing the brand’s recently taken decision to become an all-electric only vehicle manufacturer by 2026, the models in question will include the e-tron 50 and 55 SUVs, the coupe-styled e-tron Sportback 55 and Sportback S, and the e-tron GT as well as the RS e-tron GT.

Shown for the first time on local soil at the Kyalami Festival of Motoring two years ago, the crossover styled e-tron is likely to arrive first with outputs of 230kW/540Nm in the entry-level 50 quattro and 300kW/664Nm in the 55 quattro that employs a 95-kWh battery instead of the former’s 71.4-kWh pack.

Revealed in 2019, the Sportback employs the same battery, but as indicated, will have an S model that produces 320kW/808Nm or, for a few seconds, 370kW/973Nm on overboost.

Unveiled in February this year, the e-tron GT and RS e-tron GT, the latter being the first all-electric RS model, serves as Ingolstadt’s interpretation of the Porsche Taycan with the 93.4-kWh battery in both producing of 350kW/630Nm in the former and 440kW/830Nm in the latter.

Both feature an overboost function though that lifts output and torque to 390kW/640Nm in the GT and to 475 kW in the RS, whose torque remains unchanged.

More details, including final pricing and spec, will be announced next year or possibly towards the end of 2021. Details can however be found on audi.co.za.