Five model line-up headed by the SQ5 that continues to use power petrol than diesel. 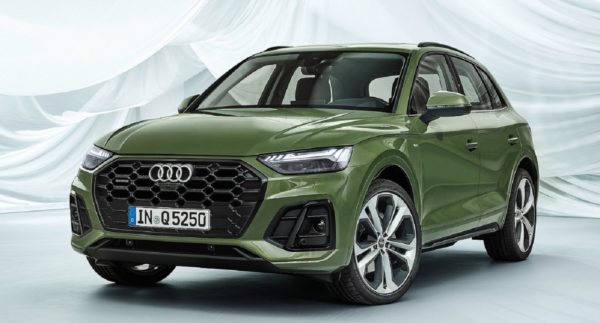 District Green a new addition to the Q5 colour chart.

Audi has continued its new or updated model onslaught on South Africa with the introduction of the tweaked Q5 and SQ5.

Arriving a year after their respective European siblings, the changes to the now four year old models comprise a Q8-styled front facia made up of a new Singleframe grille and redesigned standard LED or optional Matrix LED headlights with OLED technology, new door sills, a newly added diffuser insert and standard 19 or optional 20-inch alloy wheels.

Available in a choice of twelve colours, including two new hues; District Green and Ultra Blue with the added option of the black styling package on all but the unbadged base model, the Q5 measures 19 mm longer than before with Audi claiming a boot capacity of 520-litres with all five seats in place, and 1,520-litres with the rears folded down.

Inside, all models are equipped as with the 10.1-inch MMI infotainment system, which can be upgraded to the MMI Navigation Plus system with embedded satellite navigation as a cost option.

ALSO READ: Audi brings the knife out on Q5

Part of the optional technology package on the Q5 but standard on the SQ5 is the 12.3-inch Virtual Cockpit Display instrument cluster that receives model specific readouts and graphics on the latter, with other changes being an optional colour Heads-Up Display and new safety tech in the form of  Pre-Sense City Collision Avoidance.

Up front, the local line-up has streamlined to three engines with the Q5 deriving motivation from either a 2.0 TDI that produces 140kW/400Nm in 40 TDI badged models or a 12-volt mild-hybrid 2.0-litre petrol that punches out 183kW/370Nm in the 45 TFSI.

Paired to a seven-speed S tronic gearbox, both derivatives are equipped as standard with quattro all-wheel-drive with the 40 TDI getting from 0-100 km/h in 7.9 seconds and the 45 TFSI in 6.3 seconds.

In a departure from the European model, and indeed the local market SQ7 and SQ8, the SQ5 once again makes use of petrol powered instead of diesel with the 3.0 TFSI V6 pumping out 260kW/500Nm. Mated to a seven-speed S tronic gearbox as well, the SQ5 will accelerate from 0-100 km/h in 5.4 seconds and top out at 250 km/h.

Going on sale from the first of next month, both the Q5 and SQ5’s sticker price feature a five year/100 000 km Audi Freeway Plan as standard.