New Toyota will slot in between C-HR and RAV4 in Japanese carmaker's local SUV line-up. 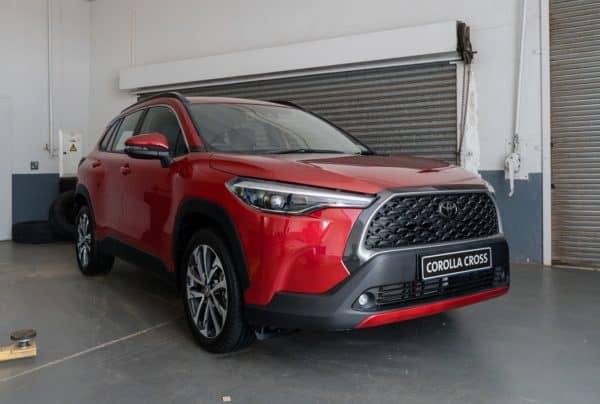 The Toyota Corolla Cross is the latest addition to South Africa's favourite nameplate.

The Toyota Corolla is undoubtedly one of the automotive world’s biggest success stories.

Since its local introduction in 1975, over one million Corollas have been produced and sold in South Africa. Originally built as a compact sedan, the nameplate has spawned a variety of sedans and hatchbacks which included models like the Sprinter, Avante, Conquest and Quest.

While the nameplate became synonymous with reliability, one highlight of the Corolla’s rich heritage was undoubtedly the RXI and RSI model from the late 1990s. These reached cult status with their sporty 1.6-litre 20 valve engines that still provides a thrill in today’s day and age.

The current local Corolla family consists of the 12th generation Corolla in its traditional sedan form, the Corolla Hatch and the Corolla Quest. The Corolla sedan stays true to it original virtues with emphasis on space to move a family and their luggage, while the Hatch offers sportier styling and performance. The Quest, which is based on the 11th generation Corolla, is the gateway to the range with a strong focus on value without compromising specification levels.

In November, the family will further expand with the addition of the locally-built Corolla Cross, the first SUV adaptation of a Corolla model. The Cross’ main attribute will be versatility, which is combined with all the other virtues that made the Corolla a winning recipe over so many decades.​

In the Toyota SUV family, the Corolla Cross will slot in between the C-HR and the RAV4. This means Toyota’s full SUV range, starting with the Urban Cruiser and followed by the C-HR, Corolla Cross, RAV4, Fortuner, FJ Cruiser, Land Cruiser Prado and Land Cruiser 300, will consist of eight offerings.

Two engine options are offered: a 1.8-litre petrol engine producing 103kW of power and 172Nm of torque and a 1.8-litre Hybrid featuring a combined system output of 90kW. Both models send the twist to the front wheels via Continuously Variable Transmission (CVT).

The hybrid option, which was pioneered in the Prius and now also available in the RAV4 and Corolla, is part of Toyota’s new energy strategy.

In terms of styling, the Cross can instantly be recognised as a smaller sibling of the RAV4, with the addition of some unique elements. Similar to the RAV4, the Corolla Cross features high mounted flat headlights which flanks the grille, while. Unlike the RAV4, the Cross does not feature the horizontal opening between the bonnet line and the radiator grille, with its simplistic grille design a striking feature.

In another change from the RAV4, the Corolla Cross’ fog lights are situated on the edges of the lower grille and not housed in the bumper directly below the headlights like the RAV4.

At the back the Corolla Cross features a more rounded design than its bigger sibling, without the connected strip between the taillights.

Where the two siblings are clearly related are on the sides, with both featuring similar amounts of rugged black plastic on the lower door sills and around the prominent wheel arches, plus blacked-out B and C-pillars and roof rails.
Standard specification on the outside includes colour coding, keyless entry, power-adjustable and auto-retractable exterior mirrors, LED taillamps and automatic light control.

A six-services/90 000 km service plan is standard on all Corolla Cross models, with service intervals pegged at 12 months/15 000 km. A three-year/100 000km warranty also forms part of the offering. The Hybrid model carries an eight-year warranty on the Hybrid battery.

For more information on the Corolla Cross, click here.