Wait over: Controversial BAIC B40 Plus priced

Known internationally as the BJ40, the B40 Plus makes its long awaited debut two years after showing itself on local soil. 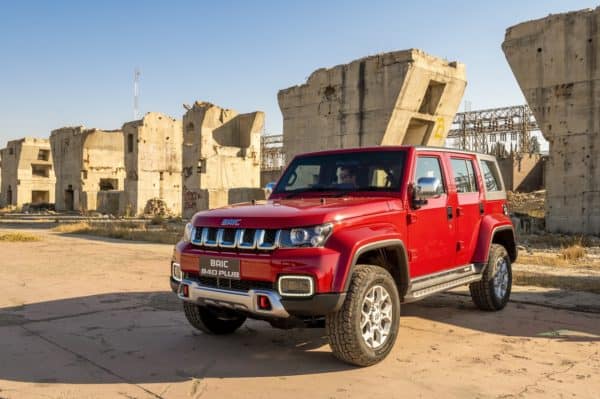 More than a few eyebrows will be raised at the B40 Plus.

Having flown underneath the radar since the high profile opening of its R11-billion factory in the Coega IDZ outside Port Elizabeth three years ago, Chinese auto giant, Beijing Automotive Industrial Corporation (BAIC), has officially detailed its new B40 Plus for South Africa.

Revealed to the South African media and the public at the Kyalami Festival of Motoring two years ago, the B40 Plus, which has been renamed as its official designation in China is BJ40, the letters denoting Beijing Jeep, arrives on the back of a mid-life in 2019 that brought revised styling, more features and a new line-up of engines.

Only offered as a five-door without the previously used L suffix, the B40 Plus takes more than a few styling hints from the Jeep Wrangler with BIAC stating that the trademark grille, which boasts five instead of seven slots, pays tribute to the Great Wall of China instead of the military Willy’s original.

Like the Wrangler, the B40 Plus’ roof can be removed fully, though seemingly not the doors. In addition, the windscreen doesn’t appear to fold forward like on the Wrangler.

Sporting a double wishbone suspension and coil spring setup at the front with a five-link coil spring layout at the rear, the B40 Plus comes as standard with not only low range, but also a mechanically locking rear differential.

Available as the BJ40L in China since 2016, the B40 Plus derives motivation from a choice of two turbocharged 2.0-litre engines; a petrol that produces 160kW/320Nm and a diesel that develops 110kW/350Nm.

While the former unit can trace its roots back to the H family developed by Saab, a legacy of BAIC’s acquiring several technologies from the brand after its bankruptcy, the diesel is new as the BJ40L is an all petrol affair in China.

ALSO READ: Controversial BAIC B40 Plus unveiled ahead of 2020 market launch

Both are connected to six-speed transmissions though with the diesel being a manual and the petrol exclusively offered with a ZF-sourced automatic.

In terms of specification, the B40 Plus comes in three trim grades with the unbadged base model featuring the following:

Building on the City Hunter, the top-spec petrol only Champion receives a leather wrapped steering wheel and electric adjustment for the driver’s seat.

Strangely, no details regarding the infotainment system was released, but as evident by the model shown two years ago, the B40 Plus boasts a ten-inch display as well as a 12.3-inch digital instrument cluster, both modelled on Mercedes-Benz units as a result of BAIC’s partnership with the three-pointed star.

A total of six colours are meanwhile offered: