Going on sale next year, the Integra will only be offered in North America and by Honda's upmarket division. 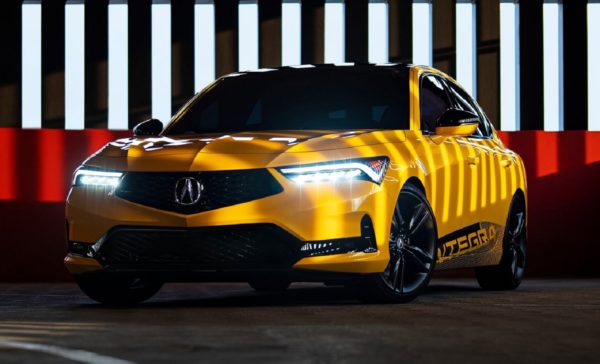 As with previous generations, the eventual production Integra will be sold as an Acura in North America.

Having made the announcement earlier this year, followed by a batch of teaser images, Honda has officially taken the wraps off of the all-new Integra, albeit in pre-production prototype form.

Going on sale in North America next year, the eventual production model, as evident by the badge, will once again be marketed under the Japanese marque’s luxury Acura division with a reported starting price of $30 000 (R459 532).

Shown as a four-door sedan rather than a two-door coupe previous generations became famous for, the revived Integra is based on the same platform as the new Civic sedan and hatch, and sports Acura’s latest design language in the guise of the so-called chicane LED headlights, a gloss black diamond pentagon grille and a lower air dam also finished in gloss black.

Despite the bodystyle, the prototype’s most distinguishing feature is the fastback, coupe-styled rear that pays homage to the fourth generation Integra, better known by its DC5 internal moniker, which rated as the last model to wear the Integra from 2001 to 2006.

Finished in a colour called Phoenix Yellow, a hue offered on the DC5 Integra Type R, the prototype is mounted on matte black 19-inch split-spoke alloy wheels with additional styling traits consisting of Berlina Black finishes for the mirror caps and diffuser, as well as a thin Berlina Black bootlid spoiler.

Despite not divulging any details or even revealing the Integra’s interior, Acura did confirm minor technical details. For now, power will come from a 1.5-litre turbocharged engine, which is likely to have the same 147kW/260Nm as the unit in the Civic Si.

As with previous generations, the amount of twist is delivered to the front wheels through a six-speed manual gearbox with a limited slip diff also being present.

Acura has however remained mum on previous reports of a Type S model rumoured to produce the same 265kW/480Nm as in the TLX Type S.

On course to debut in the North American spring that runs from March to May, the Integra will however be a US only model with no plans at present to make it available with the steering gear on the right.