With arch-rival Ford having taken the wraps off of the all-electric F-150 Lightning last year, General Motors (GM) has taken another step into the ever increasing electric bakkie market in North America with the all-new Chevrolet Silverado EV.

Interchanging with the Ram 1500 as the States’ second best-selling new vehicle behind the F-150, the plugged-up Silverado debuts as GM’s second electric model after the revived Hummer, now marketed under the GMC brand, but the first aimed directly at the offering from the Blue Oval.

Sporting a more lifestyle appearance along the lines of the Honda Ridgeline and Hyundai Santa Cruz rather than being a modified version of the recently updated standard Silverado, the EV is based on the same Ultium Platform as the Hummer Chevrolet claims “offers a boundary-breaking combination of capability, performance and versatility, along with advanced technologies”.

Bowing at the Consumer Electronics Show in Las Vegas, the Silverado EV incorporates styling largely derived from the Hummer, although with a number of bespoke differences.

Initially limited to just two trim levels; the basic WT or Work Truck and the step-up RST First Edition, the double cab only EV sees the return of what GM calls the multi-flex midgate.

Last offered on the Chevrolet Avalanche that ended production in 2013, the midgate comprises the lowering of the bulkhead between the rear seats and loadbed in order to accommodate items up to 3.3 metres in overall length. According to Chevrolet, the Silverado EV can tow 3 628 kg and haul payload of 544 kg, though a special fleet package for the WT will up the former figure to 9 071 kg.

Like with the standard Silverado and rebadged GMC Sierra, the EV is available with the multi-flex tailgate that deploys automatically. In addition, it also comes with adaptive air suspension and the Hummer’s four wheel steering system.

Compared to its exterior, the EV’s interior has more in-common with its sibling in both look and design. This includes an eleven-inch digital instrument cluster, Heads-Up Display and in the case of the RST, which rides on 24-inch alloy wheels, an angled seventeen-inch infotainment system.

Nestled in the middle with the space underneath the bonnet being reserved for storage, the Silverado EV is motivated by an electric motor and battery of unnamed capacity, which produces 380kW/834Nm in the WT.

More models will therefore be released but like the standard Silverado and indeed the Hummer, the Silverado EV will only be made with left-hand-drive. 1/6
Silverado EV in base WT or Work Truck spec with an aftermarket nudge bar. 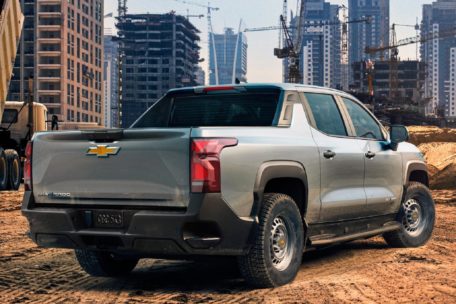 2/6
WT will have steel wheels as standard. 3/6
Loadbed can be split into various sections. 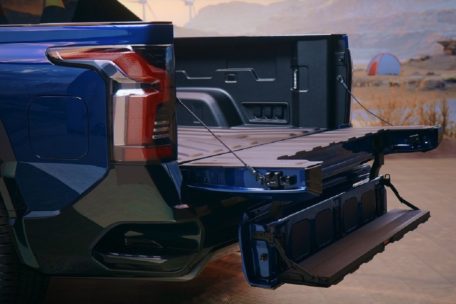 4/6
Multi-flex tailgate can also be fitted. 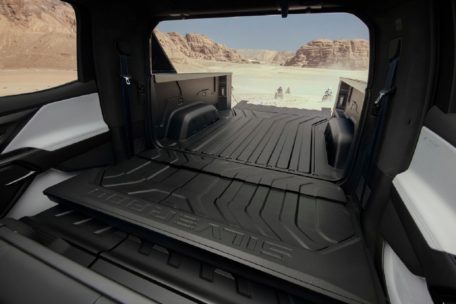 5/6
For first time since the Avalanche, the Silverado EV comes with a so-called midgate that lowers the bulkhead between the cabin and loading bay. 6/6
With no engine up front, items can be stored underneath the bonnet.