Consistency the key as Giniel holds on in Dakar

He wasn't won a stage yet in this year's event but continues to play a key role for his Toyota Gazoo team. 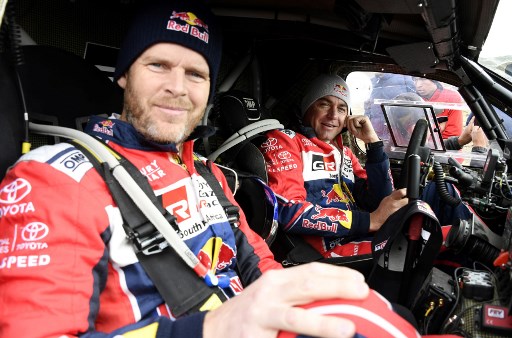 Though he has not yet made a major impact on the race, unable to pick up a stage win during the first week of the gruelling battle, Giniel de Villiers is hanging on after six stages of the Dakar Rally.

Delivering consistent performances throughout the first half of the annual contest in South America, De Villiers was lying fifth overall in the general classification ahead of Friday’s rest day, with the race moving from Peru to Bolivia.

De Villiers finished fourth on Thursday’s sixth stage, as he continued to play a key role for the Toyota Gazoo Racing SA team, covering the 313km timed section less than six minutes off the pace of Spaniard Carlos Sainz who won the stage for the powerful Peugeot outfit.

French driver Stephane Peterhansel continued to lead the general classification, more than 27 minutes clear of teammate Sainz, as they tightened their grip on the race.

The local Toyota Gazoo team filled the next three places, however, with Dutchman Bernhard ten Brinke lying third and Qatari Nasser Al-Attiyah in fourth position overall, one spot ahead of De Villiers.

Meanwhile, Argentine driver Lucio Alvarez was in 14th place overall for the Overdrive Toyota team, supported by South African navigator Rob Howie, as they continued to claw their was back into contention despite rolling their vehicle on stage two.

The SA duo of Hennie de Klerk and Gerhardt Schutte were still working hard further back in the field in their Volkswagen, hanging on to 32nd position in the general classification.

All four South African competitors were also putting up a fight in the bike division, spearheaded by David Thomas who settled in 49th position on his Husqvarna.

After the race’s only rest day, the field will tackle the seventh stage on Saturday between La Paz and Uyuni, which includes a 302km liaison and a 425km special.