Time running out for Giniel and Toyota in Dakar chase

Despite their setbacks, Peugeot keep their overall lead as the South African and his teammates can't capitalise. 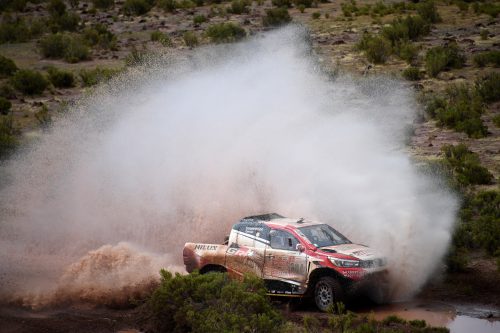 Though all three drivers were gunning it in the chase, the local Toyota Gazoo Racing SA team continued to trail the lightweight Peugeot buggies as the second half of the Dakar Rally got under way on Sunday at high altitude in Bolivia.

After losing a lot of ground the previous day, Frenchman Stephane Peterhansel edged out compatriot and Peugeot teammate Cyril Despres by 49 seconds to win the 498km eighth stage.

Nasser Al-Attiyah of Qatar was a little more than a minute further back, finishing third on the stage as the quickest of the Toyota Gazoo vehicles.

He held on to second place behind Sainz in the general classification (GC), though he faced a deficit of more than an hour with six stages left.

Dutch driver Bernhard ten Brinke grabbed fourth spot on the eighth leg, lifting himself to fourth overall, and Toyota Gazoo teammate Giniel de Villiers settled for ninth on the stage, with the South African dropping back one place to fifth in the GC.

Further down the field, South African navigator Rob Howie and Argentine driver Lucio Alvarez slipped back to 15th position, while the SA pairing of Hennie de Klerk and co-driver Gerhard Schutte were clinging to 32nd spot overall with five stages left in the two-week race.

In the bike division, South African rider David Thomas was in 45th place, followed by compatriots Donovan van der Langenberg (55th), Willem du Toit (58th) and Gerry van der Byl (98th), who were all putting up a fight, with the entire SA contingent still in the race.

Frenchman Adrien van Beveren (Yamaha) maintained his advantage at the top of the overall two-wheel standings.

Meanwhile, organisers confirmed that Monday’s ninth stage between Tupiza and Salta had been cancelled due to poor weather conditions, and drivers would travel by road to the next bivouac, as the race moved from Bolivia to Argentina.

The two-week contest was expected to resume with the 10th stage between Salta and Belen on Tuesday.