Toyota Gazoo on form but Peugeot hold their grip at Dakar 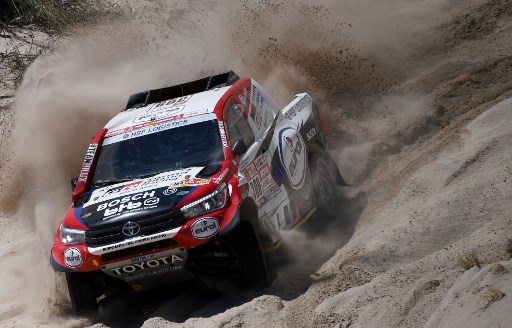 Dutch driver Bernhard ten Brinke with his co-driver Michel Perin of France steers his Toyota during the Stage 10 of the Dakar 2018 between Salta and Belen, Argentina. / AFP PHOTO / FRANCK FIFE

Dutch driver Bernhard ten Brinke stormed to his first stage win on Wednesday, gaining a few minutes on the rest of the field, but it was not enough to shake the standings at the Dakar Rally in Argentina.

Spaniard Carlos Sainz, who grabbed third spot on the stage, held the overall lead after more than 36 hours of racing. He was over an hour ahead of Peugeot teammate Stephane Peterhansel.

Al-Attiyah was around 23 minutes further back in third place, followed by Ten Brinke and De Villiers, both within 17 minutes of their teammate.

On the bikes, David Thomas moved up a few spots to 38th on his Husqvarna, as he continued to lead the South African contingent.

And while they were trailing overall leader Matthias Walkner of Austria by more than 18 hours, the other three SA competitors were still gritting their teeth in the two-wheel division, with KTM riders Donovan van de Langenberg and Willem du Toit lying 55th and 56th respectively, and Gerry van der Byl hanging on in 86th position at the back of the field.

The 12th stage of the two-week race, to be held between Fiambala and San Juan on Thursday, features a 270km liaison section and a gruelling 523km special stage.