The NISMO LEAF RC ended the day with just less than 50% charge remaining. 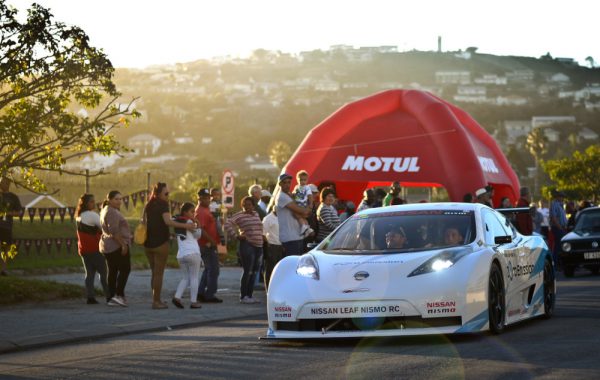 41.361 seconds. That was the time to beat for saloon cars on day one of the Jaguar Simola Hillclimb in Knysna.

The time was set by Wilhelm Baard in his BB Motorsport Nissan GT-R R35 “Armageddon” during the first of two qualifying runs held as the sun started to set over Knysna in the Western Cape. 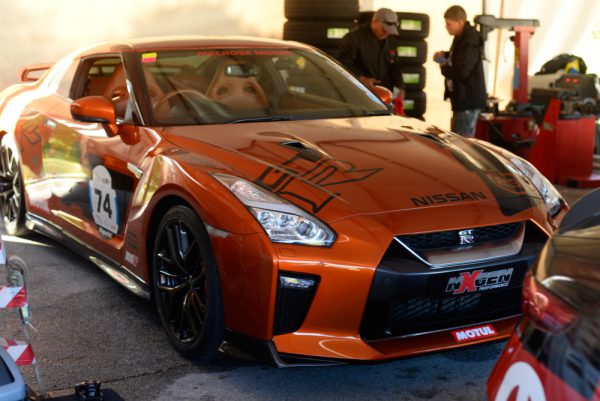 Baard started the day well in front of the large group of modified saloons, which included several GT-Rs and a selection of other supercars. After the first run – where he set a time that would stand unchallenged for most of the day – Baard started experiencing problems with his custom braking system. During his second practice run, this unsettled the car and caused a high-speed spin at the top of the hill.

“When I hit the first corner of that run, I realised that the GT-R was not happy. By corner two, the car felt downright skittish and by the time I hit the top speed at the top of the hill, the GT-R lost traction and started to spin,” says Baard.

Thankfully, Baard and his GT-R returned down the hill in one piece to a race crew waiting to diagnose and fix the problem.

“We managed to fix the problem and towards the end of the day, the GT-R ran like clockwork. I think we are set for a very competitive second day,” says Baard. 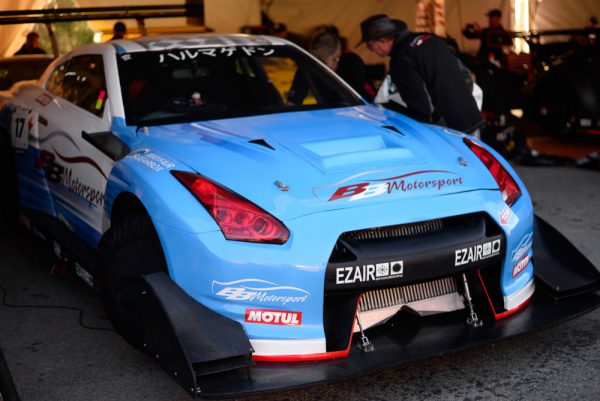 “This year we fitted my GT-R with a wide-body aerodynamic kit, an uprated engine management system and several new mechanical components. Compared with last year, when I competed with limited modifications, this GT-R is brutal!” says Zwiers.

“I had to make a mental shift in the way I drove, especially in my racing line, since the GT-R was much wider than before. Fortunately, the GT-R performed faultlessly, and we are well positioned to compete for the trophy tomorrow.”

At the other end of the racing spectrum, Janus Janse van Rensburg competed in South Africa’s first-ever all-electric racing vehicle. “The car performed really well and we got faster as the track warmed up,” says Janse van Rensburg, who set a qualifying time of 56.681 seconds in the newly created B8 class for electric racing cars. “We used approximately 6% of charge for every run up the hill and we got most of the charge back as we rode down the hill after every run, thanks to the LEAF’s regenerative braking.”

The NISMO LEAF RC ended the day with just less than 50% charge remaining. It will be left to charge overnight and will not need any additional charging during Sunday’s racing.

While Baard set the pace for modified saloons and Janse van Rensburg wowed the crowds with his near-silent racing car, Regard Roets dominated the production car category in his Nissan GT-R from Melrose Nissan.

Roets is the reigning production-car King of the Hill and he showed why by leading the pack throughout most of the day. By the end of day one, Roets set a qualifying time of 44.755 seconds.

“It took me a while to get a feel for the hill again, but the GT-R certainly helped. It is such a planted supercar and it is easy to produce very high speeds through every corner,” says Roets.

Roets’s sentiment was echoed by Kyle Mitchell in his modified NISMO-spec GT-R. Mitchell set a final qualifying time of 42.678 seconds, which is very impressive considering that it is his maiden entry in the competition. 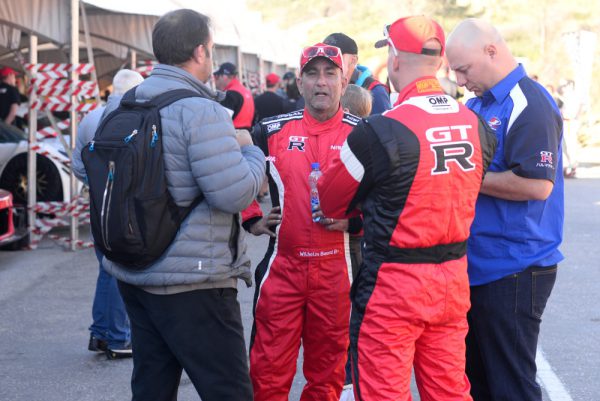 Wilhelm Baard, the reigning King of the Hill, with Edrich Zwiers (back to camera) during a short break between racing.

Says Xavier Gobille, Managing Director for Sales, Marketing and Aftersales at Nissan Group of Africa: “We are very proud of our GT-R and LEAF racing drivers today. All of them worked hard to perfect their racing lines and fine-tune their set-ups before tomorrow’s shoot-out for the King of the Hill trophy.”

“What is even more heart warming is the crowd’s wild reaction every time a GT-R or the NISMO LEAF RC launched off the starting line.” Racing resumes at 9:00 on Sunday with a quick warm-up round, four qualifying rounds and the final supercar shootout for the title of 2018 Simola King of the Hill.