The roller coaster ride continued for Team Castrol Toyota factory crew Anthony Taylor and Dennis Murphy when they scored their fourth win in a row to take the Vryburg 400, round six of the Donaldson Cross Country championship, over the weekend. 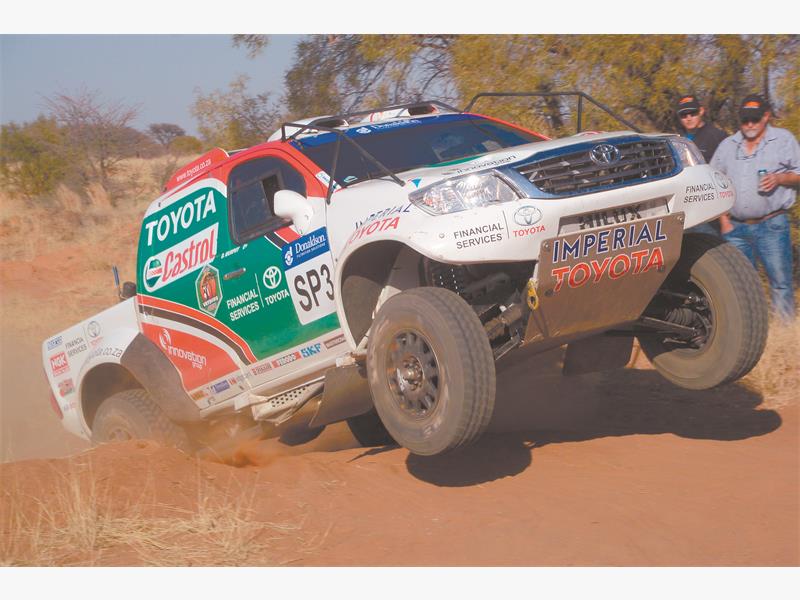 In the process they tightened their hold on the Production Vehicle championship and Taylor and Murphy stretched their championship lead to 20 points, with two races remaining, over the Ford Racing pair of Chris Visser and Japie Badenhorst.

A difficult weekend saw Visser and Badenhorst eventually fight back from seventh at the halfway stage of the race, to finish third behind the second Castrol Toyota Hilux of reigning South African champions Duncan Vos and Rob Howie.

For the Ford crew it was their sixth podium finish of the season and with 25 points on offer for race wins, they still have the ability to make life uncomfortable for Taylor and Murphy.

“It was a difficult race in difficult conditions on a very tricky route,” said Taylor. “It was a nightmare for co-drivers and Dennis did a great job.

“It was very easy to make costly mistakes and on the final loop all we concentrated on was staying on the road and keeping out of trouble.”

There was a comfortable buffer between Vos/Howie and Visser/Badenhorst who lost time on the first of two loops that made up the race with a differential problem.

“It was a tough weekend and we seemed to run into one problem after the other,” said Badenhorst. “We are still in the championship race but dropping 10 points was not what we wanted at this stage of the season.”

The Visser/Badenhorst charge saw them finish 37 seconds ahead of local crew Hugo de Bruyn and Henri Hugo in the Micaren Excel Toyota Hilux. De Bruyn and Hugo reported a clean run and came in ahead of a gaggle of SP Class entries with an encouraging day taking Mike Whitehouse and Mathew Carlson into fifth place in the Regent Racing Nissan Navara.

The Class D battle saw brothers Johan and Werner Horn score their second win in a row in the Malalane Toyota Land Cruiser.

The Mpumalanga crew had a little more than 15 minutes in hand over Jason Venter and Vincent van Allemann in the Trysome Toyota Hilux.

Another win for Dirk Putter and Koos Claasens, in a Ford Ranger, almost certainly guarantees the pair of back to back championships in Class E.