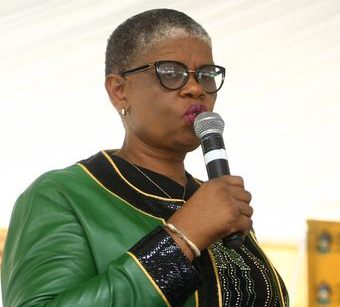 Former eThekwini mayor Zandile Gumede on Tuesday said she was open to visiting former president Jacob Zuma at his KwaZulu-Natal homestead in Nkandla for one of his infamous “tea meetings” with high-profile politicians.

Over the past few weeks, Zuma has hosted several guests at his home after he defied a Constitutional Court (ConCourt) order last month compelling him to appear before the Commission of Inquiry into Allegations of State Capture.

Some of the guests who have sipped tea with the former statesman include EFF leader Julius Malema and his entourage in early February.

Gumede said she was also willing to join the long list of people who have visited Nkandla.

“If I get time I will [visit him] and there is no problem about that. He is a former president who stays in KZN,” she told News24.

WATCH: @GumedeZandileRT says she is open to meeting former president @PresJGZuma at his home. ‘If I get time, I will.” @News24 (@kaveels) pic.twitter.com/EytHadV3dc

Gumede together with at least 17 other suspects face charges of fraud, corruption and racketeering linked to contracts worth about R430 million in the so-called Durban Solid Waste scandal.

In August 2020 she was asked to step down as a member of the provincial legislature (MPL) after an ANC national executive committee (NEC) resolution that all members facing corruption charges should do so. However, she was later reinstated as an MPL by the ANC’s KZN leadership.

At the weekend, Myeni donated food to Zuma to ensure those who are yet to visit are well fed.

She said she wanted the former president to continue hosting visitors without worrying about what to feed them.

“It’s a great pleasure and honour for me to have known you for a number of years – over two decades. Baba, the other pleasure was to know you in the workplace as well and serving you in your foundation,” Myeni said.

Thank you Mam Dudu for your continued support and loyalty to @PresJGZuma and the family. When we look around, we still see you there. We love you and your family. We acknowledge and appreciate your kind gesture, as the road and feet to #Nkandla have increased. pic.twitter.com/IK83NeYtUU