WATCH: China villagers learn to live with elephant in the room

Ma Mingliang rarely encountered wild elephants while growing up in southwestern China, after centuries of hunting and deforestation nearly eradicated them. 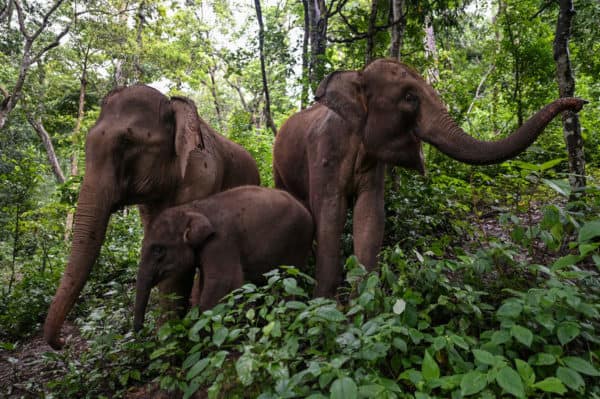 This photo taken on July 20, 2021 shows elephants eating in a forest in the Asian Elephant Breeding and Rescue Centre in Xishuangbanna in southwest China's Yunnan province. - An elephant in the street is now a common sight for residents of the animals' home territory on the Myanmar-Laos border, where a recovering elephant population is being squeezed into ever-shrinking habitat, leading to growing human-elephant conflict. (Photo by Hector RETAMAL / AFP) / TO GO WITH AFP STORY China-animal-nature-conservation by Dan Martin
​

China villagers learn to live with elephant in the room

A wandering herd of Asian elephants has captivated China for more than a year with a remarkable trek northwards through farms and cities hundreds of kilometres from their normal range in Yunnan province.

But an elephant in the street is now a common sight for residents of the animals’ home territory on the Myanmar-Laos border, where a recovering elephant population is being squeezed into ever-shrinking habitat, leading to more conflict with humans.

The tension is immediately apparent in Ma’s village in Xishuangbanna, a subtropical prefecture the size of a small country where China’s elephant population congregates.

The neatly ordered homes of the little community, called Xiangyanqing, climb up a gently sloping hillside, dotted by signs promoting human-elephant “harmony” and encircled by a steel fence separating it from adjacent jungle.

The village of rubber-tappers is entered through a wide steel gate that clangs shut at night, when hunger activates the elephants.

Still, they regularly find their way in, putting the village in lockdown until the potentially dangerous trespassers wander out, usually after raiding fruit and vegetable gardens.

“Things used to be harmonious before. But there is conflict now,” Ma said dryly.

Asian elephants, which range across South and Southeast Asia, were nearly exterminated within China, leaving only around 150 in Xishuangbanna by the 1980s.

Conservationists say a 1988 hunting ban and strict protection of a sprinkling of fragmented elephant reserves has turned things around.

With no natural enemies, the population has doubled to more than 300 and counting.

“Compared to when we were kids, there are more baby elephants in the herds now,” Ma said.

Weighing up to four tons, they consume as much as 200 kilogrammes (440 pounds) of food daily.

Increasingly, filling up means a raid on a local farm.

But Chinese scientists say growing habitat loss is part of the problem.

Authorities have been forced to address safety risks.

Xishuangbanna in 2019 installed a high-tech grid covering hundreds of square kilometres that uses stationary cameras to relay elephant sightings to a command centre, which sends out warnings to communities.

The drill: get indoors, hide upstairs out of reach, and don’t approach the beasts or use firecrackers to drive them off, which may anger them.

Throughout Xishuangbanna, statues and other imagery celebrate its leading residents — while stressing giving them a wide berth.

“The wild elephants became too troublesome and numerous, so we’ve switched to growing what they don’t eat, like tea or rubber,” Lu said.

That, however, is accelerating habitat loss, said the ecologist Zhang.

Surging demand for rubber and tea has caused plantations to steadily expand into lands traditionally roamed by elephants but which lack official state protection, squeezing them into protected but increasingly isolated pockets.

Inevitably, they roam out.

Exactly why the 14 wanderers made their mammoth trek northward remains a mystery.

But Zhang said “loss and fragmentation of their habitat may be the root cause,” exacerbated by competition for wild food sources as elephant numbers increase.

Things may worsen as climate change is projected to further reduce habitat, he added.

China is devising a new national park system to bolster habitat protection for key species like pandas and tigers.

A Xishuangbanna elephant national park has been proposed by Chinese scientists, but it faces a key obstacle.

A viable park would require the expensive and politically tricky task of reclaiming farmland and relocating hundreds of thousands of residents to link up pockets of habitat.

Until then, residents must live with the elephants.

“But we need balance between this animal and people. We have to protect them.”

Cape vultures get a lifeline with satellite tracking programme
4 days ago
4 days ago
PREMIUM!

Cape vultures get a lifeline with satellite tracking programme
4 days ago
4 days ago
PREMIUM!