WATCH: Curious baby fox stumbles upon a pair of photographers in Norway

This is the adorable moment a curious baby fox came across a pair of photographers resulting in some incredibly heart-warming footage. 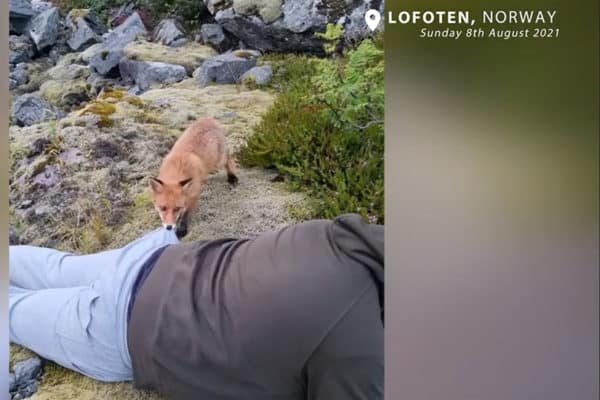 This is the adorable moment a curious baby fox came across a pair of photographers resulting in some incredibly heart-warming footage.

While trying to get pictures of a baby fox the curious critter approached the pair of photographers and began to interact with them.

Video footage shows the fox biting hold of Jens pants and trying to drag him, before walking up in front of the camera and approaching it. Marius and Jens walked away with the once in a lifetime experience and the beautiful fox itself captured on film.

Marius a Wildlife and northern lights guide for Vesterålen Tours which he Co owns with Jens said: “It was taken around 4 a.m. The video was taken in Lofoten, a 1-hour drive from Vesterålen where we live.”

“It shows a fox cub/kit/pup that circled us while we tried to get pictures of it and came up close, probably to check out what the camera was.”

” I didn’t see it coming so was wondering wtf just happen. We laughed of the situation since the fox had no chance of moving a full-grown man.” “The cub stayed around for a while so we got a lot of good pictures. then walked off up to the mountains and disappeared.”

“Our first reaction was laughing, and we both said: that’s too good not to share. We understood fast that we had something unique on tape.” “In not all countries would I recommend letting a curious cub coming this close because of rabies? But if you meet a fox, get down low and see what it does, if it’s a cub in the age where they leave their mom it may approach you.”

“This cub was one of a kind and probably used to humans, never had one that close before.”

ALSO READ: Sleep under the stars in a glass igloo in Norway