Job hunters claim they were shot by metro cops

They were waiting outside the racecourse with their CVs when police officers told them to move away as they were causing an obstruction. 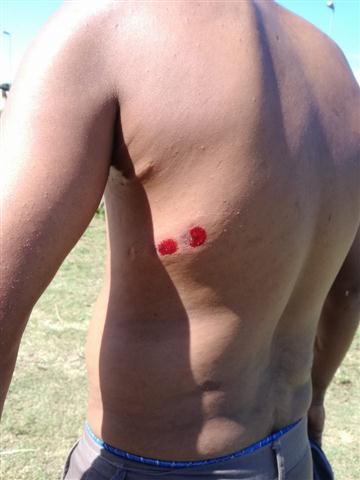 One of the victims who was shot with a rubber bullet in his back.

About 80 employment seekers claim they were forced to take cover after they were allegedly shot at by metro police while waiting for a job opportunity outside the former Clairwood Racecourse Park in KwaZulu-Natal.

Metro police spokesperson Superintendent Sibonelo Mchunu said: “Metro police together with SAPS were called in by contractors at the former racecourse to disperse a crowd of jobseekers who were forcefully trying to open the gates to gain entry on to the property last week.”

“We were met with resistance as people were forcing their way on to the property. You are going to expect a reaction from law-enforcement agencies.”

According to the local residents who wished to remain anonymous out of fear of victimisation, they were waiting outside the racecourse with their CVs when police officers told them to move away as they were causing an obstruction, Rising Sun Chatsworth reported.

They obeyed and went to stand under the bridge.

“We listened to them. They then told us we cannot stand under the bridge, so we decided to go back home. This is when we heard two gunshots being fired, and we began to run. Three of our men were hit in the back with rubber bullets. We did not provoke them, they shot at people who were walking away,” said the resident.

Another resident who was at the scene said a man from the group who was recording the incident was brutally attacked by the officers.

He claimed the officers took the man’s phone away and began assaulting him before throwing him into a van along with another two men.  They were taken to Wentworth Police Station.

“Why were our men so brutally attacked? They weren’t armed and were not posing a threat. It shows cowardliness, as these police shot them in the backs. All we want are jobs to support our families,” said the angry mother.

Another resident, Nirmala Sewnarayan, 55, said she was driving down Himalayas Road and had turned under the bridge when she heard the shots being fired. Several bullets struck her vehicle.

“I was with a relative when we were suddenly caught in the commotion. These police were just firing. We were in such shock, I drove to a family’s home, drank some water and went back to the bridge. The officers were still there, so I jumped off to ask what had transpired. They blatantly ignored me. I tried to show them what damage they had done to my vehicle. They just said they were trying to control the situation. I feel they were putting other residents’ lives in danger and proper protocol should have been followed. I have a opened a case of malicious damage to property at Wentworth Police Station.”

“The men appeared in Wentworth court for a bail hearing on February 9 and were released on bail. They will be appearing on March 27.”