The man dismissed the claims that the Barclays and Clegg store double murder was a result of a family dispute. 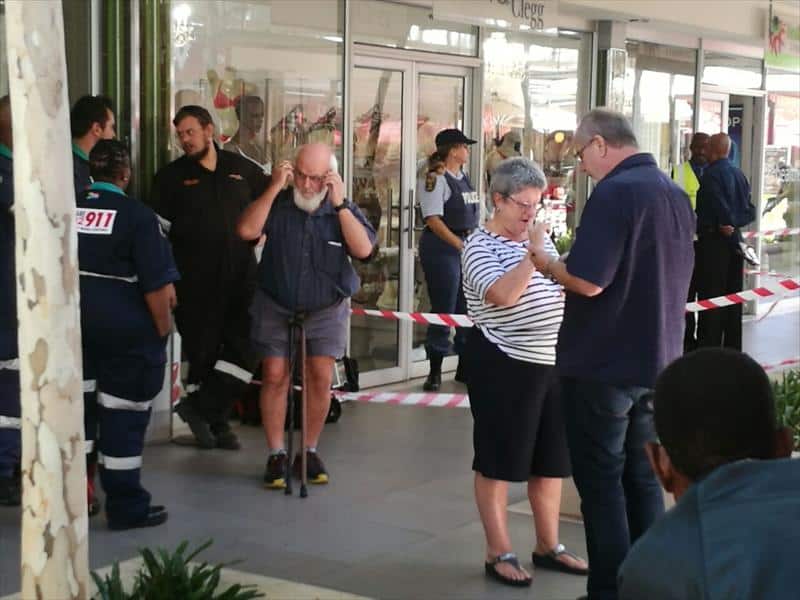 Family members arrive after learning about the double-murder at the lingerie shop. Photo: Gopolang Chawane

The son of the woman found dead in a lingerie shop on Friday has dismissed claims a family feud was behind the killing, Pretoria East Rekord reports.

Susan Meadon, 64, and a 34-year-old relative Bartho Jacobs were found dead with gunshot wounds inside a lingerie shop at the Glenfair shopping centre, leading to rumours that this was a family murder-suicide.

Meadon’s son, Edwin Muller, dismissed the claims the Barclays and Clegg store double murder was a result of a family dispute.

Muller said he was living with his mother in Kempton Park and she had been helping to look after his children for over a month.

He said his mother was full of energy. “She was never tired.”

He said the family was awaiting the conclusion of the police investigation on the motive for the killing.

“We still have to get feedback from police today [Monday] to hear what happened.”

He said funeral arrangements would start after the police had released the body and will be going to identify her (on Monday).

He said the family had notified friends and other family members, who all had positive things to say about Meadon.

Barclays and Clegg owner Maureen Esterhuysen said she was at home on Friday outside Pretoria when she received the call from employees who could not get into the shop.

She immediately called the centre management to open the store on her behalf. Inside, staff found the body of their manager.

“She was great at what she did and worked for the store for over 10 years. I just want to thank the Glenfair centre management for their support through this entire ordeal.”

Police confirmed an elderly woman and a man were found inside the shop.

Spokesperson Captain Ilze Jones said the police and emergency services were called to the scene at about 9am and forensic detectives will indicate if the case was a homicide or suicide.

Jones said she would not speculate how the shooting happened but would wait for a detailed police report. She confirmed a gun was found on the scene and that the two were related.

A shopper told Rekord she had seen Meadon alive on Thursday evening when she had gone to make a withdrawal from an ATM next to the shop.

Nikita O’Connell said she remembered seeing Meadon in the shop about 6.42pm.

“She was with someone else. It looked like they were busy cashing up,” said O’Connell.

“About 10 feet away, a blonde guy with a bunch of flowers stood looking in the direction of the shop and was still standing there when I left.”

Centre management provided counselling to family members who arrived at the shop, some in tears, on Friday morning.

Glenfair Boulevard spokesperson Willem Eksteen said Attaca, the owner of the mall confirmed the shooting and reiterated there had been neither forced entry into nor any other security breach at the store.

Eksteen said the shooting appeared to have nothing to do with the centre’s operations.