Reeva Steenkamp stood facing the toilet door when Oscar Pistorius's first shot hit her in the hip and she probably had her hands crossed in a defensive position over her head when two further shots hit her in the arm and head, a ballistics expert has testified. 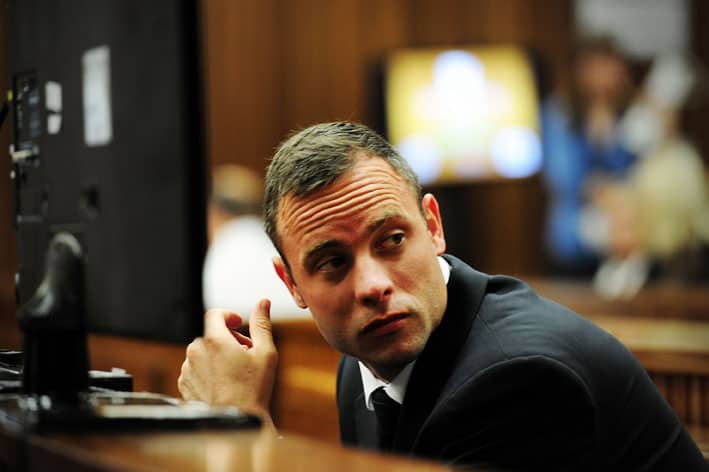 Captain Chris Mangena yesterday testified that the bullet wound on Reeva’s hip was too low for her to have been sitting on the toilet and it was more likely that she had been in a standing position facing the door when the first shot hit her.

A bullet hole through her shirt showed that the shirt was in a normal position when she was shot.

The wound to her hip would have caused her to fall and move backward, falling on the magazine rack in the toilet in a seated position when another shot was fired that missed her but ricocheted, broke into fragments and hit her on the back, causing a bruise.

Mangena said Reeva was most probably seated in a defensive position with her hands crossed over her head when the third bullet hit her in the arm with fragments of the bullet hitting her in the chest, causing holes in her vest and a bruise on her chest.

She was facing down when another bullet hit her – first in the hand and then in the head, with her head ending up on top of the toilet seat.

On impact with the skull, the bullet broke into two fragments with one fragment penetrating the skull and the other exiting towards the back of the head and hitting the wall behind her.

Mangena said Pistorius was on his stumps when he fired the shots from a distance greater than 60cm from the toilet door and he had not fired all of the shots from the same position.

a door, but opened up when hitting flesh, creating six sharp “talons” that cut through the organs of a human being.

Mangena said Pistorius could have killed a person by firing a shot into the air through the open sunroof of a car.

Pistorius’s advocate, Barry Roux, said it was his client’s version that he had fired two double taps in quick succession but Mangena was adamant that one would in that case have expected all of the wounds to be in the victim’s hip. He insisted that it was a bullet fragment and not the magazine rack that caused the bruising to Reeva’s back and said he stood by his version of the sequence of the shots.

Judge Thokozile Masipa postponed the trial to next Monday at the request of prosecutor Gerrie Nel, who said he wanted to consult more witnesses, but planned on closing his case early next week.