The case Oscar has to answer

Oscar Pistorius definitely has a case to answer, although the contamination of the crime scene may have dented the State's case that he committed premeditated murder. 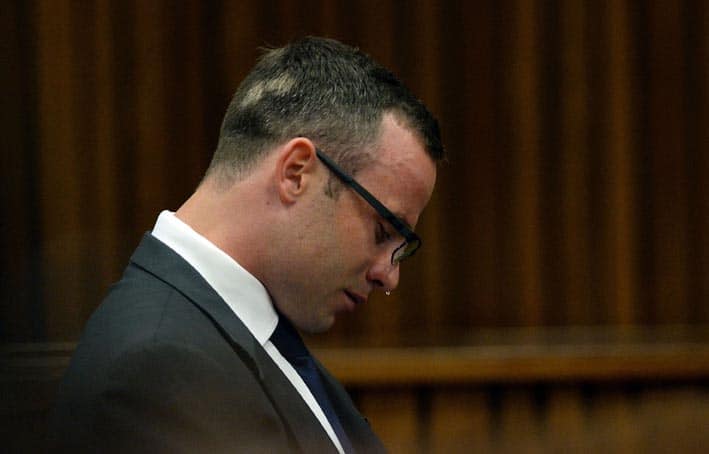 FILE PICTURE: South African Paralympic athlete Oscar Pistorius cries as he sits in the dock during his ongoing murder trial on March 24, 2014 in Pretoria. The murder trial of Paralympian Oscar Pistorius for shooting dead his model girlfriend will extend weeks longer than expected, with a long list of prosecution and defence witnesses yet to take the stand. The trial was supposed to have wrapped up by now, but a court statement on Sunday said the highly-publicised hearings could extend as late as May 16. AFP PHOTO / POOL - Chris Collingridge

Experienced criminal defender Advocate Piet Pistorius (no relation) said it was not in dispute that Pistorius had shot his girlfriend Reeva Steenkamp and that she died as a result. Only his state of mind at the time was in dispute.

“The main question to be answered is what he thought at the time, and clearly he must come and explain it.

“He will have to explain why he thought he subjectively believed there was an intruder in the toilet, that their lives were in danger and that he was entitled to defend them in the way he did.”

Pistorius said the contamination of the crime scene could be a material factor, as experts made assumptions from facts and the scene as they found it. If the crime scene did not correctly reflect the facts existing at the time the crime was committed they could make incorrect assumptions.

“The contamination of the scene may play a vital role. It is all about interpretation and two experts may come to vastly different conclusions. That’s why the protection of the crime scene is so vital,” he said.

Police witnesses admitted to removing the bathroom door through which Reeva was shot from the crime scene and storing it in an office; that the door at one stage had a police shoe mark on it; that a policeman had picked up the alleged murder weapon with his bare hands; and that two expensive watches belonging to Pistorius had disappeared from the crime scene.

In terms of the Criminal Procedure Act, an accused in a criminal trial had to testify first before calling further witnesses, unless the defence brought a formal application with reasons why the accused should not testify first. If an accused did not testify, or only changed his mind after calling witnesses to testify on his behalf, an adverse finding could be made against him.