Having teed off in the early groups, Oliver Bekker and Ulrich van den Berg had to wait until late in the day to confirm their lead on the opening day of the Telkom Business PGA Championships at Country Club Johannesburg. 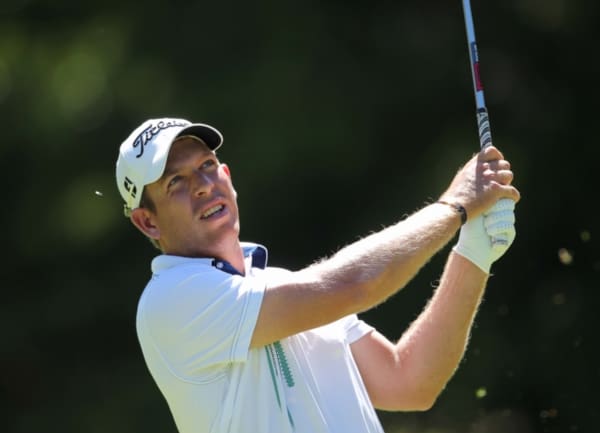 Oliver Bekker during day 1 of the Telkom Business PGA Championship at Country Club Johannesburg on April 03, 2014 in Johannesburg, South Africa. EDITORS NOTE: For free editorial use. Not available for sale. No commercial usage. Photo by Carl Fourie/Gallo Images

First-round scores of 65 were enough to put the two into a share of the overnight lead in the R3.75-million event at seven-under-par, although there were several lively challengers, especially in the afternoon field, with Danie van Tonder and Darren Fichardt chasing them down.

Six birdies on the back nine, to go with two on the front, meant that 29-year-old Bekker had reason to smile after the first round although a bogey on the par-five sixth hole, which cost him the outright lead, left him slightly frustrated.

“It’s great. I enjoy this course a lot and hopefully I can just keep it going. I think it just suits my eye. I seem to putt very well here. I just kept it in play and it suits my game it seems,” Bekker said following his round.

“Pretty much the same,” he said of his strategy heading into today’s round before adding: “I’ve been swinging well for three or four months now so if I can just keep on hitting it in the fairway and on the green and giving myself a good look at birdie.

“If the putts go in you score well and if they don’t then you score alright.”

Van den Berg on the other hand managed birdies on the third and ninth holes before a back nine of 31 strokes that included six birdies, with his only blemish coming at the par-three 15th hole when he carded a bogey.

Pre-tournament favourite George Coetzee, who won this event in 2011, is in a share of third place alongside Shaun Smith at six-under-par after both shot rounds of 66.

Four players are in a share of fifth place at five under par with Ruan de Smidt, Merrick Bremner, Christiaan Basson and Van Tonder, who had his late charge halted by two bogeys, with another group of seven players at four under.