‘Some’ job cuts confirmed by Microsoft

Microsoft said Thursday it was cutting an unspecified number of jobs amid reports the US tech giant was reorganizing its global sales operations.

“Today, we are taking steps to notify some employees that their jobs are under consideration or that their positions will be eliminated,” Microsoft said in an email response to an AFP inquiry.

Earlier, CNBC television said the company would be cutting some 3,000 positions, mostly from its non-US sales staff.

“Like all companies, we evaluate our business on a regular basis. This can result in increased investment in some places and, from time-to-time, re-deployment in others,” the company said in a statement.

The layoffs come as the US software colossus refocuses its sales force on making Microsoft a pivotal part of businesses relying on cloud computing, according to media reports.

Microsoft had more than 121,000 employees worldwide at the end of March, according to its website.

“From large multinationals to small and medium businesses to non-profits all over the world, organizations are using Microsoft’s cloud platforms to power their digital transformation,” Nadella said when the company reported its earnings for the first three months of this year. 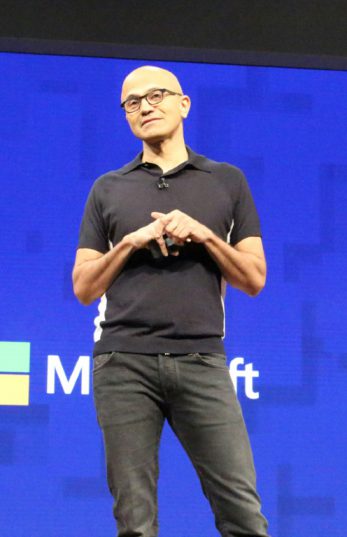 Microsoft chief executive Satya Nadella, seen in May 2017, has been refocusing what was once the largest technology company

Global Equities research analyst Trip Chowdhry saw layoffs such as those taking place at Microsoft as symptoms of a technology industry undergoing a “major overhaul” caused by a shift to computing and online services being hosted in the internet cloud.

“This is not the end,” Chowdhry predicted.

“At companies transitioning from the old world to the new world you will see layoffs accelerate; it’s a slow and gradual and painful experience for them.”

Microsoft Azure and Amazon Web Services are the dominant “super-clouds” for computing, according to the analyst.

With super-cloud computing platforms, resources can be focused on refining and supporting a single version of operating software instead of versions released every year or so to be installed on machines in homes or businesses, he reasoned.

“You look at Microsoft, and you realize that certain things that worked in the past are not gong to be relevant in the future,” Chowdhry said.

Microsoft has been shifting to a cloud-based model under Nadella, as the industry moves away from packaged software that once was the core of its business.

Microsoft said revenue from its “Intelligent Cloud” rose 11 percent from a year earlier to $6.8 billion.

Microsoft is to release its earnings for the recently-ended quarter on July 20.

Each of the companies has also been investing in artificial intelligence which can make services hosted in the internet cloud more intuitive and insightful when it comes to handling data or catering to needs of users.

Redmond, Washington-based Microsoft has announced thousands of jobs cuts in recent years, the most severe being 18,000 positions eliminated in 2014 related to its acquisition of Nokia and failed efforts in the smartphone market.

Microsoft completed its $26 billion acquisition of the professional social network LinkedIn late last year as part of its new strategy.